A memorial plaque on the facade of an old building served for a long time as the only reminder of the well-known founder of Esperanto, Ludwik Zamenhof, who once lived in Grodno

A memorial plaque on the facade of an old building served for a long time as the only reminder of the well-known founder of Esperanto, Ludwik Zamenhof, who once lived in Grodno. The house of Doktoro Esperanto, as he is called all over the world, stood deserted for ten years, until local entrepreneur Nikolay Shamin claimed the building in 2013, being fascinated by the unusual resident. The house has been reconstructed with maximum authenticity, and Nikolay now intends to open an exhibition devoted to the founder of this still popular language. 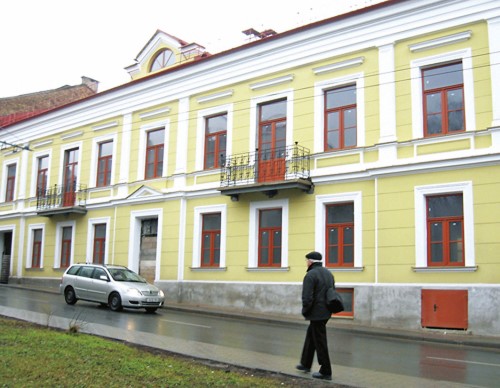 The house of Ludwik Zamenhof in Grodno

Ludwik Zamenhof (his Russian name was Lazar Markovich) was born in 1859, in multinational Bialystok: at that time, part of the Russian Empire. He considered Russian as his native language but, since childhood, spoke Polish and German fluently. Over his lifetime, he studied eight other languages. His family promoted linguistic inclinations, as his father, Markus Zamenhof, and his uncle Joseph taught languages, and were experts on literature and polyglots.

From early youth, Ludwik dreamt of giving people a common, easy way to understand language, to overcome alienation. He began developing a universal language as a pupil and devoted all his life to the idea. Of course, it took time and persistence: his father threw his first notebook into a stove, wishing his son to focus on ‘real business’, instead of imaginings. The talented boy then studied at two universities: in Warsaw and Moscow, becoming a good eye-doctor. However, he never gave up on his ideas and had finished his first sketches by the time he turned 18 years old. By 1885, Zamenhof had written a manual, publishing four brochures over the coming two years — in Russian, Polish, German and French.

The author took on the pseudonym of Doktoro Esperanto (‘Esperanto’ is translated as ‘one who hopes’) placing his own philosophy into his new language. He wrote, “In every person, I see only a human. I estimate everyone according to their personal qualities and acts. Any insult or oppression of a human for belonging to another nation, with another language, religion or social class, I consider as a display of barbarism. I believe that countries belong not to this or that nation, but completely and equally to all inhabitants, irrespective of their origin, language or social status.”

The new language quickly became popular. In 1888, the first society of Esperanto experts came into being, issuing a monthly newspaper. Those early days saw most ‘users’ hail from the Russian Empire; Pushkin’s Blizzard was the first literary translation into Esperanto and various literary figures praised the ingenious language, helping to promote it — including Leo Tolstoy. It spread from Russia into France; it was there that, in August 1905, the first World Congress of Esperanto took place, gathering nearly 700 Esperanto experts from 20 countries.

In 1893, Ludwik Zamenhof moved to Grodno with his family, living there for four years, running a private eye clinic. It is this building which is now owned and renovated by Nikolay Shamin, who tells us, “We found people to kindly donate exhibits for display since, unfortunately, none of Zamenhof’s belongings remain in the house: only a few 19th century glass chemist bottles, probably held by Doktoro Esperanto. A memorial plaque to the founder of the amazing language will soon return to the facade.”

It is difficult to know how many people speak Esperanto today, but perhaps 20 million. Thousands gather for the annual world congresses and many of these may yet visit Grodno, to honour the memory of Doktoro Esperanto.