The village of Motol, located in Brest Region, is known for its Museum of Bread, as well as for baking buckwheat and millet on the stove

Dishes according to ancient recipes

The village of Motol, located in Brest Region, is known for its Museum of Bread, as well as for baking buckwheat and millet on the stove 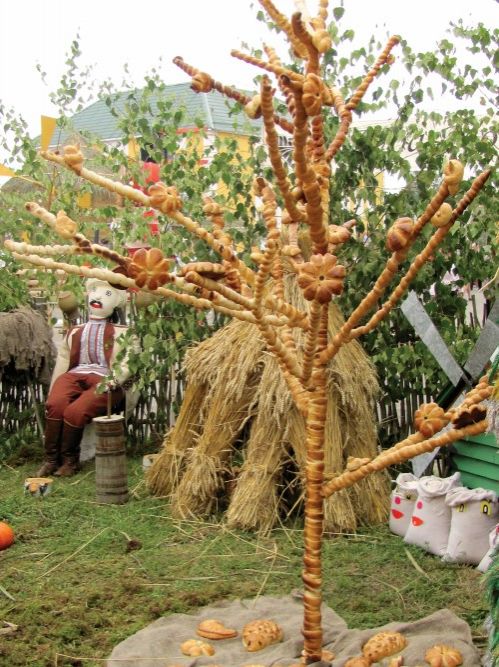 Its draniki (potato pancakes) with kidney beans are particularly appetising, as is its recipe for stewed beans with onions and carrots. No one forgets having a Motol home-cooked sausage, or lardon from a wooden vat. Meanwhile, at Easter, there are all manner of cakes and pies.

Most importantly, residents know how to present their dishes attractively. Those in Ivanovo District began celebrating their love of cuisine several years ago, via the Motol Delicacies Festival, which is utterly unique. There is even a Museum of Bread in the village. The ‘tasty’ holiday is held in August, suffusing the settlement with the aroma of freshly baked bread.

Aniks-Saniya private bakery, which opened the museum, makes its own cookies, pies and pastries, as director Nikolay Stasevich tells us. Those visiting the museum can take classes in the ancient art of bread making, including grinding flour by hand, sifting and making dough. “We’ve collected unusual recipes for making bread, as well as rare utensils, and other exhibits,” he explains. 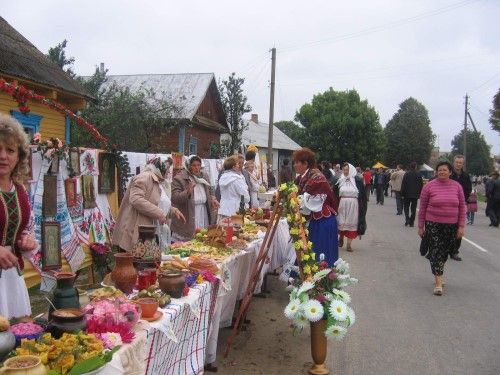 At the traditional festival in Motol

Tourists can watch a film about the ancient custom of baking, and the ceremony of dividing the ‘karavai’ (round loaf) at a wedding. Expert Motol residents bake the loaf in the house of the groom, and that of the bride, with the work of their bakers shaping the destiny of the new couple. A number of stages are essential: kneading; placing the loaf in the stove; decorating it with dough ‘cones’; and partition. Prayers and songs accompany each step of the process, to bring good fortune to the marriage.

Olga Matsukevich, the founder of the Motol Museum of the National Way of Living, notes that the round loaf tradition has existed for many centuries. She emphasises, “People began making the round loaf around midnight, keeping all others away, to ensure that the dough wasn’t contaminated or bewitched.”

Vadim Prokopchuk, the regional co-ordinator of the UNDP project Local Entrepreneurship and Economic Development, which is operating in Brest Region, is delighted with the museum’s work. He comments, “Many recipes for baking bread in Polesie have been gathered here. In the future, Aniks-Saniya may even make its own souvenir goods.”

Motol dwellers revere the round loaf ceremony, passing it from one generation to the next. They would dearly love to see it awarded the status of an intangible treasure of Belarus — or become part of UNESCO’s World Heritage.

Of course, Motol is known for more than just its bread. Despite having just 4,000 inhabitants, it engages in all manner of food production: its branch оf the District Consumers Society has a sausage shop and one for fish, while Shikolai private enterprise also deals with fish and seafood. Minuka makes sausages and smoked products, and Agro-Motol co-operative’s early potatoes are spoken of far beyond Belarus.

Local authorities, businesses and international organisations are all eager to support Motol’s niche success. Nikolay Shikolai, Chairman of the Koopprom branch of Ivanovo District Consumers Society, notes the village’s long association with cuisine. Italian Bona Sforza, the wife of the Grand Duke of the Grand Duchy of Lithuania, Sigismund I the Old, helped Motol gain the Magdeburg Right in 1555. By setting up home in Motol, she attracted skilful handicraftsmen and traders. According to legend, such Motol surnames as Polto and Kulbeda have Italian origin, while the surname Kuzyur is of German origin. However, today’s most popular surnames are Shikolai, Kashteliyan and Minyuk.

It seems that around 90 percent of Motol residents are already running their own entrepreneurial businesses, without waiting for the Government support. They all believe in ‘helping themselves’ rather than expecting assistance from others. The Chairman of the Ivanovo District Executive Committee, Yuri Bisun, underlines that no one is afraid of hard
work in Motol.

The Motol Delicacies Festival draws European tourists every year, bringing revenue into the village. The Museum of Bread was created with USAID/UNDP Local Entrepreneurship and Economic Development funding, becoming part of the ‘Motol Highway’ tourist route. It joins the new ‘Motol Venice’ estate, the local Museum of Folk Life and National Creativity, the Museum of National Medicine (in neighbouring Strelno village), Fiodor Dostoevsky’s Literary Museum (in the agro-town of Dostoevo), eco-routes on the River Yaselda and numerous agro-estates.