For several years, trade between Belarus and Russia has been reaching about $40bln annually. Belarus is among Russia’s top five trading partners, while Russia is, traditionally, Belarus’ major trading partner. Production co-operation is gaining momentum, alongside innovation collaboration. This is primarily the result of interaction at regional level and the introduction of new forms of joint work. Agreements on co-operation tie Belarus with most Russian Federation regions; Minsk is receiving official delegations from 10-15 Russian regions annually. Since the beginning of this year, such business contacts have grown rapidly. 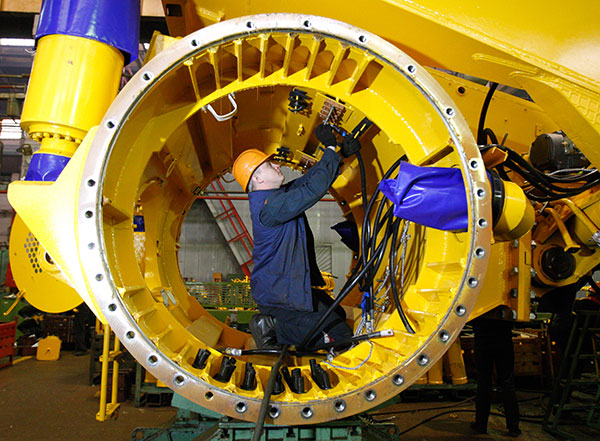 Future nuclear experts are being trained at the Belarusian National Technical University (BNTU) and, in line with an inter-university agreement on co-operation, students are undertaking their pre-graduation internship at nuclear power engineering institutions and organisations in Nizhny Novgorod Region. They also undertake internships at the Nizhny Novgorod State Technical University’s Atomic Power Station Department (the ‘alma mater’ for nuclear power sites in Russia). The best BNTU graduates continue their Master’s degree at this institution. Educational programmes, textbooks and learning and teaching aids are being jointly developed, with electronic educational resources exchanged. In 2014, during the summer holidays, a joint Belarusian-Russian student brigade worked at the construction site of the Belarusian nuclear power station, and is set to do so again this year.

The Belarusian Education Ministry recently sent a delegation to the Nizhny Novgorod State Technical University, touring their research facilities, as well as the nuclear power centre and base chair at the NIAEP. The visit resulted in the signing of a plan of co-operation for the period until 2020: including the publishing of a manual in Belarus on the main equipment used at nuclear power stations with ‘fast neutron’ reactors.

Meanwhile, three groups of Nizhny Novgorod Region specialists (in such technical spheres as radioelectronics) have been attending BNTU’s Institute for Staff Training and Retraining. Teachers from our two universities often share expertise. The Deputy State Secretary of the Union State, Alexey Kubrin, praises their liaisons, saying, “For the past three years, Union State technological university forums have been organised at the BNTU, with the Nizhny Novgorod State Technical University taking an active role. Alongside interaction in the sphere of nuclear power, we’re extending our interaction in developing IT and material science. This will help form a common technological and scientific space for a wide range of Belarusian and Russian universities, through their technological profile and beyond.”

Negotiations held in Minsk during the recent visit by the Nizhny Novgorod delegation prove this to be true. The guests gained familiarity with opportunities at several leading Belarusian universities, while the education ministers of Belarus and of Nizhny Novgorod Region, Mikhail Zhuravkov and Sergey Naumov, discussed prospects for expanding co-operation. In particular, they agreed to work together to extend professional education: an acute issue in Russia.

Resource centres at lyceums are teaching new technologies across various specialities, with the first such centre opening in Belarus a decade ago: around 20 now exist in Nizhny Novgorod Region alone. Agreements have been signed to promote collaboration: shared educational expertise and exchange of students (including post-graduates).

Delegations from Chuvashia are also frequent guests to Belarus. The head of this Russian Republic, Mikhail Ignatiev, visited Minsk as Agriculture Minister and recently arrived again with a vast business programme. The major goal is to ensure positive dynamics for mutual trade-economic relations. Over the last three years, Belarus-Chuvashia trade turnover has increased 2.5-fold and, as Mr. Ignatiev told the President Lukashenko, “Chuvashia views Belarus as a reliable and beneficial partner.”

“We’re keen to see our relations develop across the sci-tech and agro-industrial spheres,” he added. “Developing our points of coincidence is vital to driving forward our enterprises in the industrial branches, via horizontal ties. We should be able to double or triple our trade turnover, enabling our entrepreneurs to liaise on a mutually beneficial basis and create high-performance and well-paid jobs.”

Mr. Lukashenko agreed, noting that co-operation in the sphere of passenger transport is also promising. The guests toured bus production lines at Minsk Automobile Works and discussion in this vein continued during Mr. Ignatiev’s meeting with Belarus’ Prime Minister, Andrei Kobyakov. The latter spoke in favour of supplying Belarus-made agricultural, communal and transport machinery, as well as developing industrial ties of co-operation. Cheboksary — the capital of Chuvashia — is famous as a scientific-industrial centre of Russia. Liaisons could be arranged in the manufacture of automobile components, perhaps through the Automotive Comopnents Holding in Belarus, since corresponding industrial enterprises are located in Chuvashia.

In April 2015, 15 new Minsk-made low-floored buses were added to the Rostov-on-Don fleet. City administration head Sergey Gorban stresses, “The quality of these buses meets those required for our city’s preparation for hosting the 2018 Football World Championship. In July 2015, another batch of Minsk vehicles will be delivered to Rostov and, in total, the city plans to acquire 300 low-floored buses of large capacity. Minsk Automobile Plant boasts great opportunities in this respect.”

Like Belarus, Chelyabinsk Region boasts well-developed machine building, making this a point for interaction. Assembly of components for BelAZ heavy-duty dump trucks, MTZ tractors and Belarusian agricultural machinery is to be organised in Chelyabinsk Region using Belarusian technical drawings. Negotiations between the Governor of Chelyabinsk Region, Boris Dubrovsky, and the President of Belarus, Mr. Lukashenko, have outlined several promising areas for co-operation, including machine tool building, the agrarian sector and construction.

These and many other proposals are included in the plan of trade-economic and sci-tech co-operation signed by Belarus and Chelyabinsk Region for 2015-2017, in Minsk.