Minsk hosted the annual seminar of heads of diplomatic representations and consular establishments.

Minsk hosted the annual seminar of heads of diplomatic representations and consular establishments. Diplomats from all over the world (today, Belarus has more than 50 representations abroad) arrived in order, as it is called, to synchronise watches. Some considered it training, others, a master class. Both options are correct. There were lectures and practical training in the Academy of Public Administration and get-to-know trips to the enterprises to study their export potential, and various meetings in the ministries. 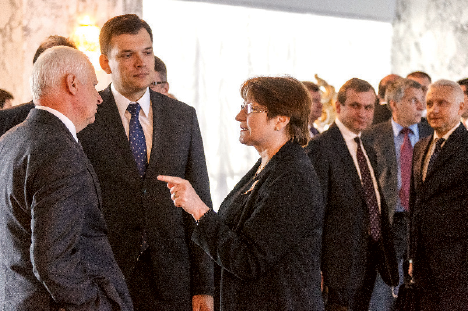 During meeting in Minsk


Аnd in general, what does it mean to represent the country abroad? We spoke with ambassadors about their daily routines, trade and economic relations, the growth of Belarusian exports and prospects of foreign investments, about Belarusian migration and compatriots abroad and how policy and international relations influence the growth of exports and attraction of investments. These Belarusian ambassadors are interesting and competent people.

People, who are far from diplomatic work, create a mysterious aura around it. Many people dream to take a look behind the scenes of the big world of politics (which from time to time is called the Big Game). On closer examination of diplomatic work, it appears a lot less glamorous than many people think. It has a lot of routine, trifles, wearisome attention to detail, game on semi-tones, handshakes and half-smiles. Of course it cannot be done without glamour (receptions, formal dinner parties and sitting behind one table with the mighty of this world), but it is too part of the ritual and, yes-yes, do not laugh, part of their ‘job’. Very often diplomats are hungry when they get up from the table. After all, if everything was eaten, it means that there was nothing to talk about. It is better to describe real diplomatic work with the words from a song about people of an absolutely different trade: ‘at first sight it is as if not visible’. Sometimes it is not visible, even at second sight. But when diplomats are successful with their job, we too feel it — by the changed relations with Belarus and Belarusians around the world, by the foreign speech sounding in our cities, on the greater number of foreign companies coming to our market, on our sensation that all of us live in one small world and feeling an integral part of it. Our conversation with the Ambassador Extraordinary and Plenipotentiary of Belarus to Germany, H.E. Mr. Andrei Giro, started that way. “Belarus is not in a vacuum, Belarus is in uniform European space, and consequently, in the most severe competitive environment.”

The economy is the main theme of work of any Belarusian establishment abroad and, with Germany; our economic relations are especially strong. Last year bilateral goods turnover made a record $4.8 billion. Almost 450 representations of German firms work in our country. Mr. Giro tells, “When a German investor considers the question of creation of new manufacture somewhere to the east of Germany, he or she takes into consideration several dozens of factors: from geographical position, infrastructure, quality of training of local labour the ease/difficulty of appearance on the market, visas, residence permits, purchase of property of the future enterprise, the possibility of reception or purchase of habitation and a range of other factors. And, if we want German investors to come to us, we should be competitive in comparison with other countries of the region.” 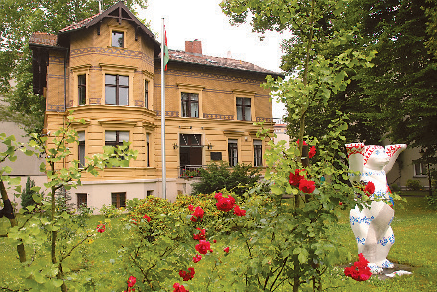 Building of Belarusian embassy in Berlin


The parameter to which many businessmen pay attention is the World Index of Doing Business, which is prepared annually by the World Bank. Last year, Belarus was positioned in 63rd place, which is quite good — five years ago we were in the second hundred, “The Government set an ambitious task — to enter the top 30 of the countries with the best conditions for running business. For this purpose, it is necessary to reform some things, to simplify other things, in particular our system of taxation and registration of companies. However, on registration we are probably one of champions of this rating because, in order to register the company, we created the one stop-shop principle, allowing a foreigner to quickly, and without serious consequences, receive a permit to run their business. It is valued.”

Another advantage Belarus receives in connection with the signing of the agreement on creation of the Eurasian Economic Union. Ambassador Giro calls it ‘an absolutely new geopolitical situation’. “Before, of course, we were not so interesting to big German manufacturers, compared to a country with a 10-million market. Such a market can be interesting to small and average businesses, but not for big. Now, there appears a market with 170 million potential consumers, and that is another thing completely.”

So we return to the beginning of our conversation — to competitiveness. Andrei Giro ticks it off on his fingers, “First — we are on the way from Europe to Asia. The Paris-Berlin-Warsaw-Minsk-Moscow highway is the shortest and most convenient. The second — our infrastructure is better developed even compared with some European Union countries. Poland constructed a motorway from Warsaw to Berlin only for the 2012 European Football Championship, while we have had motorways since 1980, since the Olympic Games, from Brest to the border of Russia. Add the branched network of transportations, driveways, a railway system, and the two well-known transport corridors — the West to East and the North to South — also come across Belarus. Plus the aim of our country at the creation of large transport and logistical centres which allow for the delivery of products, to maintain them in warehouses of temporary and constant storage and then from there to sell in other regions — these are our advantages, I think.” And according to Ute Kochlowski-Kadjaia, Director General of East and Central European Business Association, those Germans who already work with us, highly appreciate our intellectual forces.

But there are no reasons for complacency. The arrival of new companies has slowed down recently. But it is connected with many factors, Andrei Giro explains, “First, in the early 90s there was a real boom and vogue for going to the east. At the time when the curtain and the Berlin wall fell, all rushed to search for new chances in the east. Then all large firms opened their representations also in our country. We have both Siemens, and Bosch, and Lufthansa, and BASF, and all that we connect with the concept of a ‘German company’. Then everything cooled down, then the crisis in Eurozone (and worldwide) started. Therefore, companies are now so actively coming to us, even though, in the last five years I have not heard of anyone who has come, considered the decision as an error, and then left.” 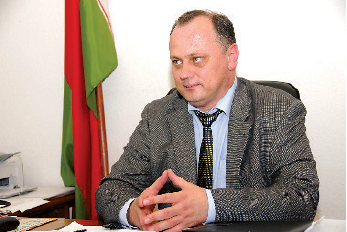 Andrei Giro, the Ambassador to Germany


The main indicator of the work of Belarusian foreign establishments is considered to be bilateral trade turnover in general and Belarusian export in particular. We’ve already discussed about the record figure of goods turnover with Germany. Well, Belarusian exports to Germany are also growing. “Last year, we had an expectation of 120 percent growth, but it appeared 111 percent, not bad, but slightly under fulfilled,” the ambassador admits.

“Does Belarus feel competition from the countries of the former socialist camp?” I ask him, as our conversation again came back to the problems of global competition. Any businessman searches, how and where with the minimum costs to make a high-quality and competitive product. Besides the states of new Europe (and of former socialist camp, possessing many such advantages as Belarus has, but which are at the same time are members of the EU) also try hard at attracting manufactures from the old Europe. “Yes,” Andrei Giro agrees, adding, “But they have social safeguards, and the level of average salary is absolutely different. So the unit cost price is not always more profitable, than in our country. Mathematics solves everything. The Germans are very accurate, punctual and prudent people. If the mathematics did not work, they would not move to the east from their own borders, they would develop manufacture there. But if it is profitable for them to deliver made production from our country, then why not?”

All Belarusian embassies are similar among themselves on the tasks which they fulfil — the protection of our country’s interests abroad — but each has his or her own speciality which depends on relations which historically developed with this or that country, and on the presence, for example, in its territory of international organisations, and on how active is Belarusian migration and even, as in the case with Germany, on the size of the country. Germany is very big both in area, and in population (more than 80 million people). Berlin is only the political capital, whilst the financial centre is Frankfurt am Main and the economic is based in the Ruhr region with Düsseldorf, Dortmund, Cologne, Duisburg located along Rhine and other industrial cities. “Geographically they are far from us,” Andrei Giro ascertains. “When we had an embassy branch in Bonn [it was closed in connection with the optimisation of the structure of foreign establishments], it ‘covered’ western regions. Now it does not exist and the load on us has increased. But in 2012 we opened consulate general in Munich. Of course, it is not big, only two diplomatic employees, but they, apart from rendering of the full range of consular services, also promote our economic interests and pay attention to the development of cultural and scientific ties. Recently, we have carried out a very interesting project when the pictures belonging to a family of great antiquity — Svyatopolk-Mirsky — and whose successor lives in the territory of consular district, were exhibited in Mir Castle.”

Another feature in the work of our embassy in Germany is the absence of organised Belarusian migration. Though, apparently, there are a lot of natives of our country here. According to the Ministry for Internal Affairs of Germany, about 17 thousand citizens of Belarus legally live in this country. It can be partly explained by the absence of a shared border. Big and active movements are more often formed in neighbouring states. There are also a number of other reasons, “The majority are women who entered into a marriage with German citizens and who live on federal lands. There are no dense Belarusian areas, all are dispersed across Germany. Among our former compatriots are many ethnic Germans and Jews. They have own associations, and their connection with Belarus is rather relative, and besides, they are actively integrated into German society. It is a common feature of our people as a whole — they easily learn the German language, their children go to German schools...”

“It means they do not feel themselves to be Belarusians?” I ask.

Andrei Giro explains, “They rather feel themselves Russian-speaking people. And for them there are many other associations, structures, communities, in which our former Belarusians frequently play active role.” Among them are scientists, experts in the field of IT technologies, a lot of workers in the arts, who never refuse to perform in various activities arranged by the embassy. “All of us are proud of our citizens, and if they offer their services, we welcome it and try to involve them in the sphere of our interests, be they cultural, scientific, economic or business.”

Such is our embassy in Berlin. It is located near Treptower Park, where the Soviet soldiers who died in battles for Berlin are buried, and there is a well-known monument of a Soldier-liberator with a German girl in his hands. If you are nearby, you should come. You are always welcome. After all it is Belarusian land.