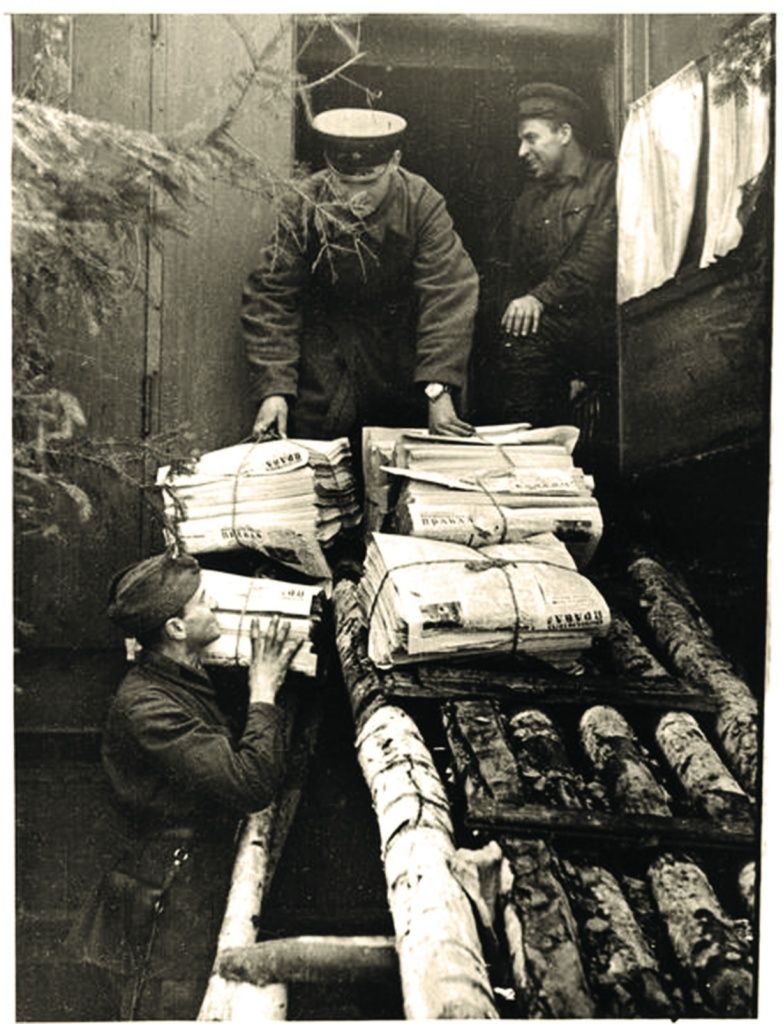 In the late 1980s, I visited Ashgabat, to meet Annakuli Mamedkuliev, the Deputy Editor-in-Chief of Gy-zyl Esger Khakykaty (as Krasnoarmeiskaya Pravda was called in Turkmenistan). The newspaper was released from November 1942 until July 1945. Annamurad Annanurov published his thoughts in 1972, in Ashgabat, in his Notebook from the Frontline. There, he stated: ‘We were granted the honour of organising and publishing a frontline newspaper. The first issue of Gyzyl Esger Khakykaty came out on January 1st, 1942, with the last issue published on May 25th, 1944. Over that time, around 90 issues were distributed, in addition to 30 leaflets. Until late October 1943, our editorial office included just two people: myself and Senior Lieutenant A. Mamedkuliev. On November 1st, 143, we were joined by Senior Lieutenant A. Annabaev. In March 1944, two more workers arrived: Senior Lieutenant T. Kurbanov and Senior Sergeant S. Dzhumasakhatov. Apart from the latter (who proofread), all had good experience of working for newspapers.’

One issue of Gyzyl Esger Khakykaty (the 3rd Belarusian Front) included notes made by Sergeant A. Lygalin (Radio Officer Zharikov) and correspondence by Kazakh journalist G. Abishev on a Turkmen soldier (Aimamed Yegendzhev). Soldier N. Fedinov wrote an article on the heroism of Ukraine’s M. Amechenko, and the issue included a poem by Turkmen poet R. Seidov — A Mother’s Letter. Mean-while, Captain M. Annanurov wrote an article entitled ‘The Friendship of Nations as a Fundamental of USSR Strength and Might’. The column ‘Letters to Front’ was used to publish materials on personalities across friendly Soviet nations, on the fulfilment of production plans, on the life of collective farms and plants, and on achievements in science and engineering’.

In reply to a letter from the Turkmen people to Turkmen soldiers fighting on the Great Patriotic War fronts (published in Pravda on April 16th, 1943), Krasnoarmeiskaya Pravda journalist Annakuli Mamedkuliev composed a poem, which was translated into Russian in 1946 and printed in Letters from the Front, published in Ashgabat.

Gyzyl Esger Khakykaty wrote a great deal of the heroism of Turkmen, and published replies by Turk-men soldiers. On July 18th, 1943, it reported that the USSR Hero Aidogdy Takhirov had killed 47 fascists. A young cavalryman from Mary District, Berdymurad Dovletzhanov, was also mentioned. He became a Communist Party member at the Front and, on September 19th, 1943, used camouflage near a village to reach a group of German snipers (who had hampered a detachment from moving forward). He killed 11 enemies and demonstrated bravery by docking a bridgehead on the right bank of the Dnie-per. After crossing the river, Red Army soldiers faced a bitter battle, and were unable to progress. Dovletzhanov crawled towards the enemy, this time killing 12 and destroying their trench mortar.

Armies, detachments and squads at various sections of the Front read the edition, with Turkmen re-porters doing their best to find their countrymen and write about them. Annakuli Mamedkuliev was especially insistent, as were other journalists, enabling the newspaper to collate extensive information.

Mr. Annanurov recollects in his memoirs: ‘We planned our newspaper month by month. I still have a working plan for April 1944, which envisaged the publishing of eight issues, with four major articles. The key themes were also outlined: discipline, order, and organisation; familiarity with automatic guns; reading and talking as the major form of agitation among non-Russian soldiers; and defeating the en-emy in guardsman style. The plan also outlined such themes as ‘helping agitators’, ‘letters on military upbringing’, ‘helping sergeants’, ‘operative materials’, ‘reviews of military action on the Great Patriotic War Fronts’, ‘in Turkmenistan’, ‘abroad’, ‘issues of daily routine’, and ‘Komsomol’. This plan provides a brief yet succinct overview of the problems addressed by newspaper materials’.

During the Great Patriotic War, a journalist at the Front, Annakuli Mamedkuliev, was published within a separate edition devoted to Konstantin Zaslonov, the Belarusian head of an underground organisa-tion. In 1985, the poem was republished as a separate book in Ashgabat, in Turkmen language. I hope Belarusians will recall this work and do everything possible to translate it into Belarusian and Russian — to enable more readers to gain acquaintance with it.

Turkmen poets Chary Ashirov and Rukhi Aliev took part in liberating Belarus from Fascist occupants. The former fought as part of the 3rd Belarusian Front, and the topic of Belarus’ liberation was widely covered in both their works. Poems by Aliev and Ashirov on tragic and heroic war times were pub-lished in Belarusian in the edition Recollecting Past Crusades (Minsk, 1990).