President exclusively interviewed by Renmin Ribao newspaper: the most influential in China and among so worldwide, with over 1,000 reporters across 70 offices and a circulation of 2.8m — annually supplemented by over 100,000 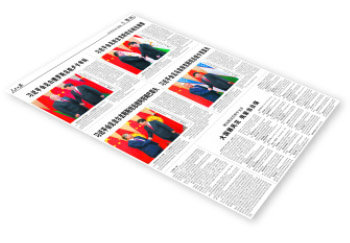 In his interview, Alexander Lukashenko said:

World War II was a central event of the 20th century, shaping the course of history worldwide for decades to come. The main burden of the war against Germany was laid on the Soviet people, while the main burden of the war against Japan was laid on the people of China. I don’t want to underestimate the role of our allies. Of course, they also made a big contribution to our common victory in Europe and Asia. However, figures speak for themselves: in accordance with recent research, the Soviet Union lost about 27 million people during the war and China lost 35 million. Other countries didn’t bear such huge losses. As part of the Soviet Union, Belarus probably suffered more than other countries, as we lost almost one third of our population.

We must openly acknowledge that there are world powers at present interested in revising the results of World War II. Why do they do so? They aim to discredit the historical truth, challenging the present rights and interests of countries which shouldered the greatest burden of war in Europe and Asia. Such things must not be allowed. As a well-known saying goes, those who fail to learn from history are doomed to repeat it. In this context, China has a special and — if you like — a historical mission: if 1.5 billion Chinese remember and honour the truth of World War II, then no one will be allowed to distort it or bury it in oblivion.

We should recall the post-war world order led by the United Nations. We must remember that, as an improved version of the League of Nations, the UN played a positive role. After 1945, major powers avoided ‘hot wars’. However, the situation is different today. The past decade, with its single-polarity, is over. We are once again speaking earnestly of building a multi-polar world.

In this respect, ideas from 70 years ago are important again: that the United Nations should play a central role. Of course, it must move with the times and conduct reforms. However, I’m convinced that the goals and principles enshrined in the UN Charter, as well as the purview of its main bodies envisaged in this document, should remain unshakable.

The Chinese people have thousand-year-old glorious historical traditions. It is common knowledge that the diligence of the Chinese people has helped China to become a modern country, playing a crucial role in global processes, driving the global economy and being a role model for developing countries.

I’d like to wish the people of China peace and the fulfilment of the Chinese dream of building a stronger and more prosperous state, on the basis of robust economic development, personal success and public wellbeing.

I wish to assure you that Belarusians are reliable and faithful friends of the Chinese at the centre of Europe. Belarus values and is proud of its all-round strategic partnership with great China.
Заметили ошибку? Пожалуйста, выделите её и нажмите Ctrl+Enter