Crucial issues are being decided in Minsk

Certainly, the crisis in Ukraine was the main theme at negotiations between the presidents of Belarus, Russia, Kazakhstan, and Ukraine and top representatives of the European Union. The format was the first of its kind and was preceded by much media conjecture. Ukrainian colleagues were clearly excited by the meeting, to which they pinned hopes for the launch of a peaceful settlement of their conflict. Russian journalists had their own views but one thing was clear: negotiations would not be easy. 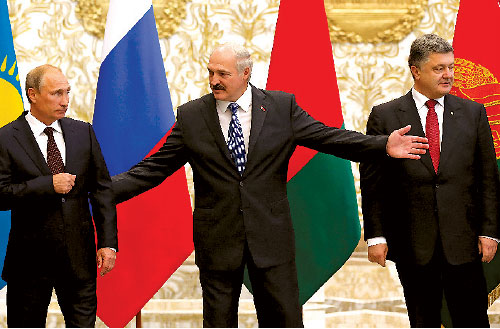 Intrigue remained after almost four hours of conversation, and work continued through an evening meal. The press could not help but speculate and it was nearly 9pm before any announcements were made. Mr. Lukashenko was the first to speak, declaring, “We’ve seriously discussed all complex questions connected with the crisis in Ukraine. Unfortunately, the situation is so serious that no decision can be made without top-level discussion. Separate steps and technical arrangements cannot settle the conflict. We’ve decided to develop a comprehensive action plan to suit all interests; negotiations were not easy but dialogue was substantial and extremely frank. It is vital and so valuable that this dialogue has finally occurred. During almost four hours of discussions, all sides expressed their opinions. Positions differ — even cardinally — but, importantly, we’ve agreed on one thing: we must search for compromise. During discussion of the conflict in the east of Ukraine, all sides agreed on the necessity of de-escalation, liberation of hostages, and humanitarian assistance. It is essential that we prevent humanitarian catastrophe. Especially now, on the eve of winter.”

The President of Belarus described the main agreed points of action as:

First: the decision for Minsk to lead in hosting future meetings between the OSCE, Russia and Ukraine (and for the next to be held soon). The proposal of the President of Ukraine was supported by all participants of the meeting;

Second: the working group should elaborate ways of smoothing the waters between the Customs Union and Russia towards Ukraine, following its signing of the EU Association Agreement;

Third: the discussion of problematic issues, connected with Ukraine, will follow the same format as that in Minsk (as suggested by the President of Kazakhstan and fully supported).

The participants of the meeting have also focused on economic problems. These primarily centred on the energy sphere, with transit and gas deliveries causing much debate. It was the first such high level dialogue between the two most powerful integration associations on the continent.

The importance of the Minsk summit, whose results have been long discussed by top politicians and experts, cannot be overstated. Events in Ukraine, at the centre of Europe, have roused close attention worldwide, as evinced by the attendance of two Deputy Chairs of the European Commission — Catherine Ashton and Günther Oettinger — and the European Commissioner for Trade, Karel De Gucht. President Lukashenko especially noted that no intermediaries had been sent to the meeting, showing that all sides were eager to see the situation in the centre of Europe resolved promptly. Public interest runs high and almost 200 journalists from 72 media outlets, across two dozen countries, covered the meeting.

Meanwhile, the prehistory, recalled by Alexander Lukashenko, is interesting. During the inauguration of the President of Ukraine, Petro Poroshenko asked that the Customs Union countries refrain from applying sanctions to Ukraine following its signing of the EU Association Agreement, requesting that Mr. Lukashenko carry his plea to the presidents of Russia and Kazakhstan. At that time, Mr. Poroshenko suggested holding a meeting to discuss problems and the President of Belarus fulfilled the request of his Ukrainian colleague: a series of meetings was organised between heads of states, in Minsk.

Mr. Lukashenko underlined, “I’m convinced that nobody in this hall wishes to profit from the current situation; the idea is blasphemy. Our nations have entrusted us, presidents, with their destinies. What should we do in response to this trust? Are we to leave smoking ruins and razed homes in place of smoking factory chimneys? Are we to doom our people to suffering? It seems to me that we`ve had enough suffering in the past. If we want to be considered responsible politicians, we should fully recognise the load of responsibility before our nations, forfeit political ambitions and seek no dividends, rather considering the destiny of ordinary people: the elderly and children — who cry, suffer and die.”

The first step in this direction has now been made. After the five-sided meeting, Vladimir Putin and Petro Poroshenko met in private, as is natural. Besides the peaceful settlement of the conflict in the southeast of Ukraine, the two presidents had economic problems to discuss.

The countries of the Customs Union are concerned by the Ukraine-European Union Association Agreement; according to Vladimir Putin, total damage to the Russian economy may surpass 100 billion Russian Roubles. A flood of European goods onto the Ukrainian market as a consequence of Ukraine dropping all import duties for EU goods could place many sectors of industry and agro-industry at risk. To protect its own market, Russia will be compelled to annul duty-free imports from Ukraine, introducing standard modes of trade. Mr. Poroshenko has agreed to create a monitoring group to estimate real losses for the Customs Union from Ukraine-EU Association. Another proposal is to start discussing the shift towards a system of mutual recognition of certificates.

Negotiations in Minsk ended with a tripartite meeting of the presidents of Belarus, Russia and Kazakhstan.