The anniversary personal exhibition "Rhythms of Time" of artist and designer Irina Kuznetsova, hosted by the Republican Art Gallery of the Belarusian Union of Artists, showing techniques in glass, painting, photography and computer graphics Irina Kuznetsova (centre) at the opening of her personal exhibition


Irina’s artistic glass creations were presented under such lyrical names as Winter Fairytale, the Princess and the Pea, and Thaw. The Princess and the Pea found witty expression of the well-known tale, with various glass discs forming a pyramid, crowned by a small pea as the focal point of light.

All is fine. I go away. I am all problems and cares.
We’ve spoken to each other of all: the weather and work.
So why does my heart thaw … I paint from memory,
How two air kisses flow over the lindens.

Irina Kuznetsova writes verses and stories; it’s part of her creative nature. One thing supplements another, helping to inspire her images.

Wind is no less interesting, with its delicate, lyrical world-view, metaphorical symbolism, and careful expression; its conventionality of form strengthens the poetic imagination of the author. Three leaves (red, yellow and blue) blow in the wind, symbolising the parting from summer colours. 
Irina considers digital photography and computer graphics to be new tools worthy of investigation. In 2010, she won a prize at the second TERRA-VITA International Exhibition of Digital Art, held at the National Library of Belarus. In Urbanisation, she shows redundant hoisting cranes and rusty metal equipment, symbolic of the passing of time. Her Geometrical Opuses of Modern Choreography comprises four parts, creating a festival of modern choreography in Vitebsk. Original stained-glass works, they are displayed surrounded by empty space.

The diptych entitled Roofs of Prague is based on her warm emotional impressions after a trip to this beautiful city: sunshine bathes the roofs, buildings and grass, turning them golden.

Sketches of these works, and for Jazz Rhythms and Baltic Breeze, were made on computer before being transferred to canvas. Irina tells us, “The computer can create special lines and a certain technical rhythm which is familiar to modern audiences.”Irina marked Easter with a conceptual work, made from 40 gramophone records, painted to resemble Easter eggs, hung from the ceiling in order to create festive mood. To the surprise of both visitors and the author herself, ‘an angel has arrived’ for the opening — a present made by the Koleso People’s Youth Theatre from Vitebsk. 
Ms. Kuznetsova is a many-sided artist, capable of surprising her audiences. After graduating from the Theatre and Art Institute (now called the Belarusian State Academy of Arts) she worked on monumental pieces at Minsk’s art-industrial enterprise. She cast stained-glass windows, chandeliers, and volumetric and spatial compositions for public premises in Minsk. Her pieces can be seen at the Small Stage of the Yanka Kupala Theatre, at such restaurants as Na Rostanyakh, and Rechenka, at the Gnomik kindergarten, at the library named after Yanka Kupala, and at the Museum of People’s Glory in Myadel city.

Her architect and artist father, Ivan Medvedev, gave her an understanding and love of architecture, which brought her to participate in architectural concept competitions in Moscow. From this came her Memorial, devoted to victims of Stalinism, and Church-Monument to the Thousandth Anniversary of Christianity, for which she was awarded a certificate of appreciation from the Holy Synod of the Russian Orthodox Church. 
Irina was one of the first to be engaged in abstract art, producing Music and Musicians, and From Mozart to Schnittke. These have been displayed at Minsk’s Palace of Arts and at Riga’s Vera Gallery. Meanwhile, Lullaby for the Sun, and ‘I’ Under the Badge of ‘Ra’ have been on show at the National Library of Belarus. Autograph, and Stikhi Ya have adorned the Palace of Arts. Her works are held by museums, galleries and private collections, across Russia, Belarus, Ukraine, Lithuania, Latvia, Italy, Israel, Germany and the USA.

In 1995, Irina Kuznetsova was awarded a medal from the Belarusian Union of Artists ‘For Merits to Fine Arts’. In the same year, she became the author of the concept and permanent chair of the organising committee of the cultural, peace-promoting Children’s International Open-air. The artistic charity event tours cities across Belarus. 
She has spent many years raising money for children’s charities such as the Children’s Fund and UN Representative Office in Belarus. She has supervised exhibitions and open-air events for gifted children and creative young people and, in 2002, was awarded a certificate of appreciation from the UN for her organisation of an exhibition of children’s drawings, entitled I, You, He for the United Nations.

Since her student years, Irina has liaised with the press, often publishing her thoughts on culture and art, and youth creativity. She loves to write poetry and fairy-tales, and has published her stories for children. Her credo is: ‘Painting, Music, Poetry are a Single Code of Thinking’. Accordingly, her many creative works, in glass, paint and computer graphics, are signed with her poetry. 
“I was born in Vilnius, so the culture of Lithuania is close to my heart, as it isto many people in Belarus,” Irina admits. “I’m currently preparing for a joint exhibition by Belarusian and Lithuanian artists. After my trip to Barcelona, I came up with a new conceptual exhibition. It’s vital for artists to travel and see a great deal. Seeing the many works of art in Barcelona galleries has inspired me anew. Modern times are difficult for artists, as it’s expensive to present an exhibition. We communicate little and rarely debate artistic issues. However, if you want to create, your imagination knows no bounds. The lack of materials is no barrier for creativity, especially in today’s art space.” 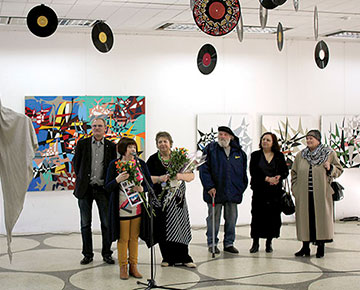