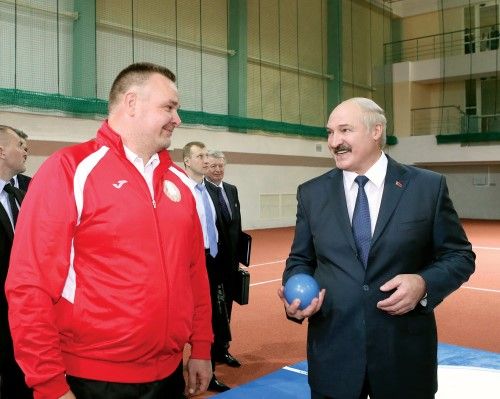 Alexander Lukashenko during his visit to the University


Answering students’ questions on how he manages to keep himself in shape, the President admitted that he spends two hours every day, regardless of a busy schedule or business travel.

He told those gathered, “Sport is part of my life. Without it, I wouldn’t be strong enough to endure my great workload.” Of course, he also genuinely enjoys sports, having played football, volleyball and basketball at various times. These days, he devotes 2.5-3 hours to ice hockey training, three times a week. “When there’s no training I either run or chop wood or play tennis with children,” added Mr. Lukashenko. He also enjoys roller skiing and mountain skiing, although has had to cut back since having a knee operation this year.

Mr. Lukashenko has asked that the existing approach towards student sports be revised by the Education Ministry, allowing the Belarusian Association of Student Sports to contribute more efficiently. He believes that professional coaches, managers and marketing specialists should have a stronger role to play in shaping policy, and wishes to see ‘the whole scientific, creative and staff potential of the branch’ directed towards promoting fitness.

He is convinced that efficiency relies on training at the country’s only sports-dedicated university, readying young people for employment in this field in their home country. “Your University should set the tone for sporting education and sports science. Being in constant contact with national teams, the University should fill sport with advanced research. No victory at the highest sporting level is possible without this,” noted Mr. Lukashenko.

Regarding training the next generation of athletes, the President asserted, “We have all the components for sporting success: infrastructure, competent coaches and talented and determined children. New sports sites should host our national teams.” He believes that these venues should be in constant use, with wide access for all the public. He also wishes to see the University focus on the patriotic upbringing of athletes and coaches, since sporting victories raise the country’s global profile. “Sport is the best way to develop neighbourliness and mutual understanding between countries,” said the Head of State. He also noted that world ratings on national development are often judged by the state of public health, making it necessary to constantly develop and improve medicine.

Speaking to athletes, Mr. Lukashenko promised to support those who bring results. He has instructed the Government to create a plan of formalised support for youngsters’ sports schools, optimising the number of personnel and children attending. At present, there are about 500 such schools in Belarus but the President laments that they are yet to produce the number of successful athletes he would hope for (not even one per school).
The Head of State emphasised that athletes and coaches can receive high salaries in Belarus if they produce results. Meanwhile, he wishes to see better conditions for the normal operation of sports schools for young people. “Just like PE lessons, these schools can promote a healthy lifestyle among school children, while revealing young sports ‘starlets’: tomorrow’s medallists at European and world championships, and at the Olympic Games,” noted Mr. Lukashenko.

The President added that such sports schools shape the character of future sportsmen and stressed, “Children’s sport and a healthy lifestyle need aggressive advertising, so that youngsters see this and want to emulate the achievements of great athletes.” 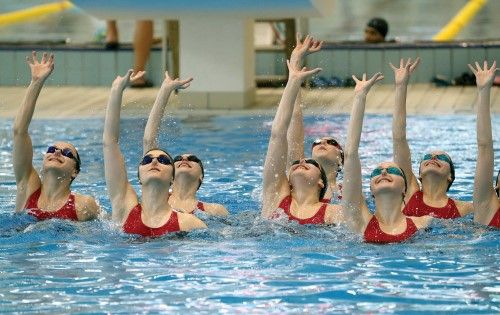 At lessons at the Belarusian State University of Physical Culture


He commented that considerable funds are being allocated to sports development countrywide, for all sections of the population. The President is eager to see the country’s gyms and sports complexes working at full capacity, with priority given to athletes, followed by all those wishing to play sport and keep fit.

The President noted that the country’s sports federations and associations are headed by high-level executives tasked with supervising development, and that success has been evident. Belarus hosts various world-level sporting events every year, such as the IIHF World Championship (in 2014) and the European Youth Olympic Festival (scheduled for 2019). The country is also bidding for the European Indoor Athletics Championship in 2019 and the 2021 IIHF World Championship.

“Of course, we expect victories and new records from our professional athletes,” stressed the President. He underlined that the formation of an educated and healthy nation is a priority, and that the hosting of top-level events plays a role in promoting the right attitude. Belarus hosts the Belarusian Ski Track competition, the Golden Puck tournament, the Leather Ball competition and a great many regional events across its towns and districts. Festivals and tournaments often encourage people to take up new sports.

According to the President, the promotion of sport among school students and those living in rural areas is essential: to encourage fitness and the playing of sports, and to inspire a positive attitude. 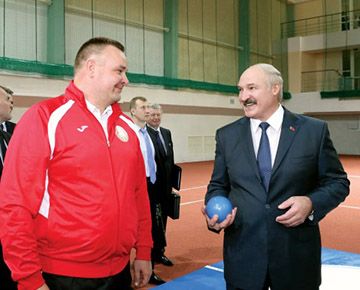