Even before Mr. Lukashenko’s plane had landed at Chisinau airport, representatives of business circles had gathered at the Palace of the Republic for a business forum: over 100 from Moldova and 40 from Belarus. 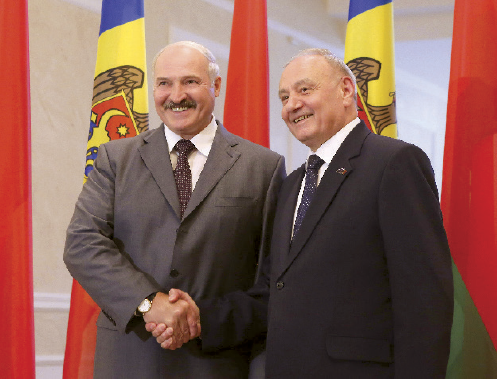 
Moldovan businesses are extremely eager to form partnerships with Belarusian colleagues, especially since gaining entry to the EU free trade zone on September the 1st. Moldova now has access to new markets but some traditional export avenues are closing; Russia, for example, has introduced a number of protective measures. Local businesses are anxious that Belarus will follow a similar path, having corresponding obligations in the Customs Union, and immediate prospects in the Eurasian Economic Union.

For the time being, our country is among Moldova’s main trading partners, purchasing at least a third of Moldovan exports. It’s no surprise then that businesses from both our countries seek to build on this, while avoiding any hindrances from membership of integration associations. In fact, there are advantages to the situation, since joint production associations on the territory of each would give the other country access to a wider market in third countries.

A business dialogue began vigorously, with four contracts signed to deliver ceramic tiles, and vehicle sets for Belarusian trolley buses and tractors; Brest Belalko JSC and Tiraspol Plant Kvint have signed co-operative agreements. Then, there followed a chain of negotiations regarding co-operation on the stock exchange.

President Lukashenko arrived on time at the State Residence, to hold official negotiations with the Head of Moldova, Nicolae Timofti. The two spent more time than initially planned, having last met in Minsk in 2000. No bilateral official contacts had been made at top-level since then, so there was much to discuss. However, as the President of Belarus noted, interstate relations continue regardless of such meetings. Minsk views Chisinau as a reliable and close partner and values its healthy dynamics of trade, which are ever improving. Trade has increased 5-fold since 2000, reaching almost $360m a year. At the start of the business forum, participants spoke about the real possibility of reaching $500m, with members of the Belarusian delegation assuring the President that this is an achievable target.

One of the central themes discussed by the heads of state was that of industrial co-operation.

Our agricultural machinery and trolley buses are already assembled in Moldova and buses are now being planned, for use on Moldova’s newly modernized roads. Mr. Lukashenko underlined that our country is ready to provide everything needed by Moldovan partners — including machine-building devices, petrochemical production facilities, light industry goods, building materials, home appliances and foodstuffs. Judging by the enterprises taking part in negotiations, these initiatives seem likely to come to fruition.

Since business interaction always develops more successfully against a background of mutual political understanding, high-level visits are important. Chisinau has signed and ratified an agreement on association with the EU, while Minsk is a committed supporter of the Eurasian vector. However, this position does not need to present obstacles, since Belarus persistently promotes the idea of an ‘integration of integrations’: allowing trade more easily — from Lisbon to Vladivostok.

The President has told journalists that final details still need to be agreed, to ensure that neither side is disadvantaged, but he believes that all questions can be solved at the negotiating table. It benefits neither Minsk, nor Chisinau, Moscow or Kiev to be ‘at odds’ economically. Belarus always keeps its promises, as the President emphasizes, and prefers to discuss difficulties in an open and fair manner, expecting the same from its partners.
Between Moldova and Belarus no barriers need to exist. On the contrary, we can use the advantages of our two integration vectors to benefit all our citizens.

The second day of the official visit of the President to Moldova began with a ceremony of laying a wreath at the monument to Stefan the Great: a National Hero of Moldova. Mr. Lukashenko then met the Chairman of the Moldovan Parliament, Igor Corman, and leaders of parliamentary groups, continuing the substantial political dialogue begun the day before.

Moldova has a florid configuration of political forces, with parties and parliamentary groups adhering to polar views, bringing quite unfriendly relations and rare unification on any issue. Leaders of all directions of policy met the Belarusian President, which speaks volumes for the importance attached to partnership with Belarus. Igor Corman noted that a third of all deputies comprise the parliamentary group dedicated to Belarusian-Moldovan friendship.

After warm greetings, conversation passed to the theme of co-operation and how to take advantage of our nations’ differently directed integration associations in the best way. Mr. Сorman explained Moldova’s choice of orientation towards the EU, believing that it is a more suitable path to modernization. At the same time, the country wishes to cultivate constructive interaction with traditional partners.

Belarus’ position is well-known, and the country is eager to find mutually acceptable variants of co-operation. Mr. Lukashenko reported on prospects to the leaders of the various Moldovan political parties, as he did with Prime Minister Iurie Leancă. Bilateral interaction was to the fore, with the head of the Moldovan Government expressing interest in discussing a wider range of problems facing regional policy. Moldova appreciates the major role played by Belarus within the international arena.

The following part of the second day took on a practical, business character, with the Presidents of Belarus and Moldova jointly opening the Keramin commercial centre. In truth, constructive co-operation does not need to contradict the foreign policy or economic aspirations of our two countries. On the contrary, it can fill them with material content.

The Centre is home to several floors housing goods made by Belarusian enterprises, which President Lukashenko believes will encourage other manufacturers. He assured those present at the ceremony that the opening of the Keramin Centre is just the beginning of the major co-operation, and that growth in goods turnover should result. He added that his meetings and negotiations look set to at least double volumes of mutual trade from today’s $1bln. The President of Moldova, Nicolae Timofti, agreed. The President of Belarus advised avoiding the dramatization of temporary economic problems, saying “Believe that nothing is insurmountable; we will be good fellow travellers.”

The Keramin Centre is to become the meeting place for the Belarusian diaspora, encouraging further business contacts. The President’s dialogue with Moldovan Belarusians was especially warm, and included a chat with a 90-year old veteran, Vladimir Voitsekhovich, who liberated Belarus and Moldova. He is a Doctor of Engineering, and a Professor, who taught the first President of Sovereign Moldova, Mircea Snegur. Honoured and respected in Moldova, his path has been one of the great achievement and value: an example to all.

During the final press conference, journalists asked Alexander Lukashenko to express his opinion on the future situation in Ukraine.

His answer was as follows:

“The way out of this conflict will be very hard, with catastrophic consequences remaining in the minds of those who have lost relatives. It is a path which must be trodden. I believe that war can be avoided, since it will bring no clear winner. Neither side can win, so what is the point of such conflict. Both sides understand this and have ceased this slaughter-house of massacre, which is major progress. War cannot be stopped at once. It is easy to start and to escalate, but withdrawal is much harder. It has always been so, through history. Too much has already been done...”