After-graduation distribution has definitely its pros and cons — as viewed by young specialists, Gennady Vashchuk and Mikhail Samoilyuk, who’ve moved from their native comfortable Brest to the hinterland. 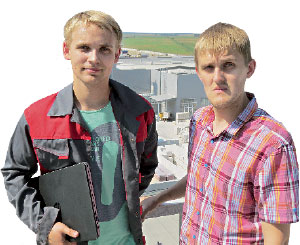 After-graduation distribution has definitely its pros and cons — as viewed by young specialists, Gennady Vashchuk and Mikhail Samoilyuk, who’ve moved from their native comfortable Brest to the hinterland.

For two months already, they have been working at KvartsMelProm, not far from the village of Khotislav in the Malorita District. The guys have come here as a result of distribution, but actually, they personally chose the exact location. Gennady and Mikhail admit now that they’ve found here everything that a young engineer could dream of.

“Our job is not at all tiresome; it’s really interesting. There’s an impression that we are a part of the Discovery TV channel,” the guys explain, while taking me to the plant’s workshops. Modern machinery produces blocks and bricks, and the company resembles a space station, with sparkling lamps and blinking screens. Arriving here, anyone would believe they are taking part in shooting of a scientific TV show.

Around six months ago, the young men got acquainted with the plant — visiting it as interns. Gennady explains that their employment depended on pre-diploma practice. Accordingly, they needed to deliberately choose the place of their future workplace and internship. The young man spent much time searching for a proper company to be employed with — studying their pros and cons. One day, he got acquainted with the factory’s present director. As a result, he changed his mind about moving to his previously chosen company in Brest, preferring the Malorita District’s Khotislav.

The two months of pre-diploma internship passed by quickly but the company Heads had no doubts in employing the guys: the results of their work confirmed that they were a worthy choice. As a result, on August 1st, KvartsMelProm ‘received’ the two young electronic engineers. The alumni of Brest Technical University admit that it might seem strange from the first sight when young men move to a village for at least two years; however, they immediately add that such thoughts are only natural for those who’ve never worked at a production facility. Not every company — in distinction from KvartsMelProm — enjoys modern equipment. Here, the most advanced German equipment (with Japanese electronics) is installed. Really, it seems unreasonable to substitute such an opportunity for a job in Brest, where 1990s production lines are still operational.

On coming into the workshop, Gennady switches on his laptop; he’s just finished a program for a controller. All bugs are fixed and the program is ready to be uploaded. The laptop is connected to the equipment and the data is renewed. From now on, no problems are possible.

Meanwhile, Mikhail admits that some might view their work as mechanical and routine. However, programming industrial controllers is a truly artistic process. As the young man notes, people express themselves differently. Some turn to painting or music, while programmers feel satisfied seeing that everything operates smoothly. Importantly, the results of the guys’ efforts could be assessed immediately at the plant (after the program is uploaded). Gennady and Mikhail agree that this proximity to modern technology and the possibility to enjoy immediate results and develop further have become the major attractions for them.

The young men live in a plant hostel. Each morning, a service bus takes them to the workplace and brings them back in the evening. The guys share a spacious one-bed flat, with a kitchen and a bathroom. Mikhail and Gennady admit that they’ve left Brest to get used to an independent life, which they enjoy greatly. They don’t believe that urban life is more joyful: the local clubs gather no fewer youngsters than a Brest club. Moreover, the village has around a dozen shops, and a sports centre (with a gym and a swimming pool) is situated in Malorita, just 10km away. In a word, everything is close at hand.

Meanwhile, the guys joke that, so far, the flat repair and decoration is their major “entertainment’; they wish to make it their true home. The money they received for coming to the village is really helpful.

Gennady and Mikhail’s career is yet to develop but the guys are already happy. They have a very healthy ambition and believe that any plans are an optimistic look into the future.