The difficult work of the restorer

Brush of artist, hand of restorer

Alcohols, solvents and lacquers are pushed aside. Brushes are gathered in a jar. An old working apron hangs on a peg. Svetlana Dikut welcomes her visitors.

Alcohols, solvents and lacquers are pushed aside. Brushes are gathered in a jar. An old working apron hangs on a peg. Svetlana Dikut welcomes her visitors. Today she is not only a restorer, but also a guide — manager of the oil painting department of the National Art Museum — who will tell students and Belarus’ correspondent how she ‘treats’ pictures. This comparison is not casual. In her conversations, she constantly compares restoration to medicine. 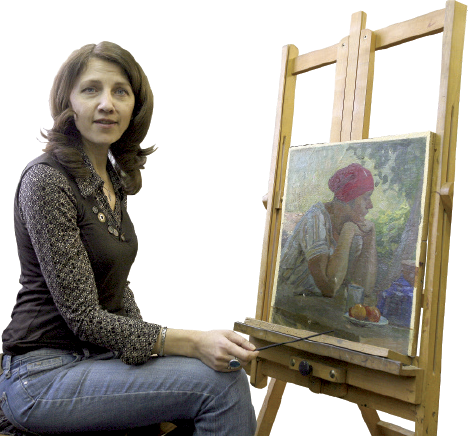 
The premises where Ms. Dikut works reminds one of an art studio. Pictures hang on the walls, stand on easels and supports. Beside them there are brushes and paints. The mistress shows her latest work — the Acathistus of the Mother of God. It is in the final stage of restoration. For comparison, there is a photo which initially fell into her hands: the third part of the picture with special sealing tape [it is papered] which are usually put in order to prevent the fall of paint on damaged places.

“Before we start working, the restoration council meets,” the guide tells. “The expert puts forward an option for the restoration of the work and the others agree or deny. Problems solving is developed and the document with the list of actions is made.”

The feature of this particular picture is that the canvas is sewn in two places. It is also one of the reasons for the damage. However, the basic reason is that the work was stored without a stretcher for a long time. My task is to restore the lost parts, without destroying the author’s concept, and also without lowering the historical value of the work. This picture has already endured three restorations.

Svetlana Dikut then moves on to the subtleties of her work. It is interesting to her students, but it is hardly necessary to foist it upon the readership. However, one, simple aspect that we will dwell on is ‘sounding’ — the purpose of defining, how to better treat the ‘patient’. In this particular case, the help of chemists is needed. They suggest what material is better to use for a particular piece. The work usually starts with light solvents, then, if it is necessary, more complicated solvents are used.

“Sometimes it is possible to remove dirty spots using a small piece of cotton covered in solvent, but occasionally it is necessary to apply a compress,” the restorer tells. “It is like the same illness for different people — an individual approach is necessary.”

And what case was the most difficult in your practice?

“Each case is uniquely difficult,” she answers with a smile, and tells about the most remembered case.
And do you have constant ‘patients’? A student enquired.

“Here on the table is a picture — Poppies by Nikolai Zalozny,” Svetlana Dikut gestures. “The picture has technological problems created by the author in the course of painting the picture, that’s why it periodically delaminates. Sometimes it happens that this ‘patient’ does not come to me for years, but then sometimes it comes every six months.”

The expert also tells about one interesting case — Portrait of E. Zolotarevsky painted by Zinaida Serebryakova, niece of the great Alexandre Benois.

“This work was hanging for a long time in our exposition under small sealing tapes,” the restorer recollects. “It is interesting that in all catalogues which I have seen, including foreign ones, it was in such a state. During a thorough examination it became clear that the process of strengthening of paint layer would be difficult.”

“The reason for the delamination is that the picture was painted over the sketch. Why it was made in such way was found after studying the history of creation of the canvas. It appeared that for a portrait of the boy, the cottage neighbour of Serebryakova, whom she painted during hard times for the family, she took an already used canvas and the simplest paints,” she explains.

“I was confused, seeing a dark-blue blind background, which is not characteristic to this artist. It was found out that someone simply painted over it, because the paints started to fall and because this was done carelessly.

Restorers have to face such cases. This picture was sold to the National Art Museum by relatives of the boy depicted on it. Actually, the museum collection was replenished in various ways. Some works were brought from expeditions across cities and lands of our country at the end of the last century, where they were found in old dilapidated houses and churches. It is clear that they were stored in bad conditions, frequently with birds and rats together under the one roof.”

The current exhibitions would be incomplete without which the skills of Belarusian restorers. Svetlana Dikut’s once dealt with Portrait of Sheremetev painted by Fiodor Rokotov. At that time the portrait was being prepared for an exhibition of Russian portraits Witnesses of Time.

“Before we got it, this picture had been in hands of amateurs,” Ms. Dikut tells. “I always say, that even time is not so cruel to art, as the hand of non-professionals. It was very hard work. It is important, while removing old paint, not to remove anything superfluous and, during restoration to preserve the author as much as possible. As a result the original Rokotov was revealed to us.”

An hour rushes by for the students and me. It seems that Svetlana Dikut can endlessly discuss her passion of restoration. But we did not want to encroach any more on her precious time. This doctor always has a lot of patients.