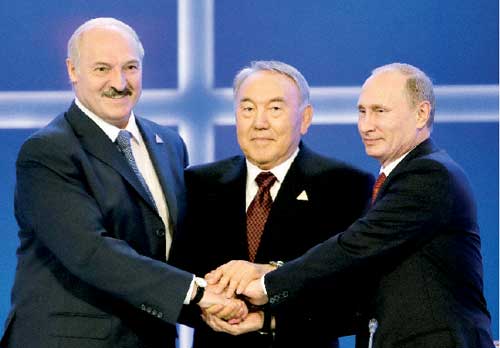 “Belarus does not  demand any concessions in the course of Eurasian integration and is ready for the complete realisation of the agreements made after much uneasy negotiating,” announced the President of Belarus, on May 29th, in Astana. Following the heads of states session of the Supreme Eurasian Economic Council, the three leaders signed a historical document: the Eurasian Economic Union Treaty.

“We have been working on the Eurasian integration project for several years. Each step was difficult but we kept our eye on the main objective: creating conditions for our people to live in peace and friendship, with state development and strengthening built upon strong foundations of mutually advantageous co-operation,” noted the Head of State.

He is convinced that our chosen path is the right one. To save the irreversible disintegration of post-Soviet territories, the CIS was formed. Later, the Eurasian Economic Community (EurAsEC) was founded, and the Customs Union created, before the contours of the Common Economic Space were shaped. Mr. Lukashenko explained, “Today, we have entered the final avenue, leading us to the Eurasian Economic Union. Our country has always taken a consistent stand on the integration process. The kernel and locomotive of the CIS is the Union of Russia and Belarus. We, as the ‘assembly shop’ of the Soviet Union, like no other, felt the need to restore economic relations within post-Soviet territory. We have aimed, taking into account everyone’s interests, to avoid destroying the regional system of division of labour. Moreover, we have tried to create a system in which we do not compete but mutually complement each other. However achieving this good purpose has proven extremely difficult; it’s been a long process.”

The Belarusian President continued, “How many opponents have appeared? From the West and ‘closer abroad’: never mind foreign countries but in our own! And not only among the opposition (which operates by criticising everything) but among some state officials (those with especially liberal views).” Mr. Lukashenko noted, “To how many accusations and claims have we been obliged to listen! We’ve been told that our integration is a reconstruction of the Soviet empire and a loss of sovereignty, comparing integration to a kettlebell tied to the legs of Russia (if speaking about Belarus) or Kazakhstan.”

The Belarusian Head of State added, “Perhaps, Belarus has endured most of all. Even now, a fuss is made in the press, saying ‘Lukashenko demands concessions!’ and that I ‘bargain for bonuses for Minsk!’ or ‘Either Russia or Kazakhstan once again take up the burdens of Belarus’ economic problems’. I want to say this to the public: ‘Calm down! We are with Russia and Kazakhstan as participants of a joint process, which is equal in rights. If we shoulder something, then we do so equally. It is our friendly union’.”

Mr. Lukashenko commented that the Soviet Union collapsed when its union of republics suddenly decided that they were ‘feeding’ someone else rather than their own interests, and felt that they could live better. “The same ‘bugaboo’ is now being presented,” the Belarusian leader noted.

“Belarus does not demand any concessions. Everyone brings something to integration that is interesting to all. This contribution cannot be measured only in tonnes, cubic metres or barrels,” the President of Belarus declared.

“We consciously approached the signing of the Eurasian Economic Union Treaty, defending our interests to the maximum, while respecting the positions of our partners, and carrying out careful analysis of the document, noting its advantages,” the Belarusian leader admitted. “I cannot say that any dissatisfaction remains, although we could improve our arrangements, for the mutual benefit of all participants of the treaty.” Mr. Lukashenko also noted that Belarus is a sincere and reliable partner, and expressed his hope for mutual understanding and a constructive approach to solving all issues.

After closely discussing all points of the agenda, the session continued in an expanded format in the presence of the presidents of Armenia and Kyrgyzstan, Serzh Sargsyan and Almazbek Atambayev, correspondingly.

The presidents of the ‘troika’ support the aspiration of partners to join the Eurasian integration and have agreed to undertake the necessary steps in this direction. However, Mr. Lukashenko noted the importance of new members fulfilling the necessary provisions before joining. “More than once, we’ve approached the question of our two brotherly republics joining the union. As adherents of expansion and deepening of integration processes worldwide and across post-Soviet territory, we (Belarusians) especially welcome this,” noted the Belarusian leader. “I can say unequivocally and directly that we have agreed and have developed a road map. Our requirements will be realised. If these states achieve the required level of readiness for joining the Customs Union and fulfil all provisions, they’ll be welcome. We’ll willingly receive these countries.”

In a solemn atmosphere, Alexander Lukashenko, Nursultan Nazarbayev and Vladimir Putin signed the Treaty to create the Eurasian Economic Union.

The President of Kazakhstan emphasised, “Today, it is important to look into the future, defining a strategy of further actions for at least the next 15-20 years. It is important to understand that the main mission of our union in the first half of the 21st century comprises two prominent aspects: firstly, to become one of the world’s key economic macro-regions; and, secondly, to ensure that each of our union members is among the globe’s developed states.” He added that members have agreed that the Eurasian Economic Commission will be headquartered in Moscow, as the economic centre of the union. Meanwhile, Minsk will host the Eurasian Court, which will solve legislative issues, and, from 2025, Almaty will host a supranational body regulating the financial markets of the union.

President of Russia Vladimir Putin underlined that the Treaty is a turning point in history, opening up the widest prospects for developing our economies and raising standards of living for citizens.

Mr. Putin asserted that the planet’s leading economic players are interested in the union. “We’ve agreed to activate negotiations with Vietnam regarding the creation of a free trade zone, to strengthen interaction with the People’s Republic of China — including in the sphere of exchange of customs information on goods and services. We’re also creating expert groups to discuss developing preferential trade with Israel and India.”

Mr. Lukashenko noted that the process of forming the Customs Union, the Single Economic Space and the current Eurasian Economic Union has been long and trying. “We lost someone along the way: Ukraine — during the Kuchma presidency. It began this path of hard work with us but, unfortunately, the burden was too heavy for Ukraine. However, I’m sure that, sooner or later, the management of Ukraine will understand where its happiness lies. At least, it will not lose that which is, by right, the possession of the Ukrainian people,” the President of Belarus said.

Mr. Lukashenko stressed, “We have high hopes connected with this document. Belarus has always taken an open position, accurately formulating its purposes and tasks within the Eurasian integration framework. Our priorities are known, as we have sincerely and fairly declared them, although this has, at times, displeased various circles.”

Alexander Lukashenko remarked that the signing of this far-reaching treaty was preceded by the huge amount of work, including that at the level of the heads of state. “We are ready to make great strides in implementing the agreements reached during a very difficult negotiating process,” underlined the Belarusian leader. “However, we should acknowledge that we postponed the solution of a number of issues related to economic co-operation, primarily those which tackle mutual trade between the member states.”

Mr. Lukashenko deems it necessary to keep working on Eurasian integration and materialise all the declared goals and objectives. “The signing of this treaty today is not the end, but just the beginning of a serious process. We should prove to ourselves, the world and our people that we have made the right steps in this direction,” believes the Head of State. “We strongly believe that while establishing the Eurasian Economic Union, we should necessarily address the issues that have a great impact on the mutual trade between the EEU member states. This will help us resolve the issues we could not settle at once. We believe that the economic union will become a foundation of our political, military and humanitarian unity,” summed up Mr. Lukashenko. 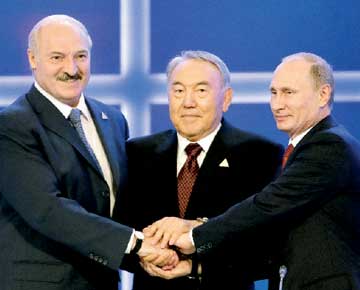