The building in Lenin Street in Minsk is well known; it truly resembles a museum in its architectural style. The National Art Museum offers much to see and enjoy and attracts many visitors. Its collection has suffered traumatic times, being utterly lost during WWII, but major efforts have enabled the museum to once more feel pride in its collection of valuable and interesting exhibits. 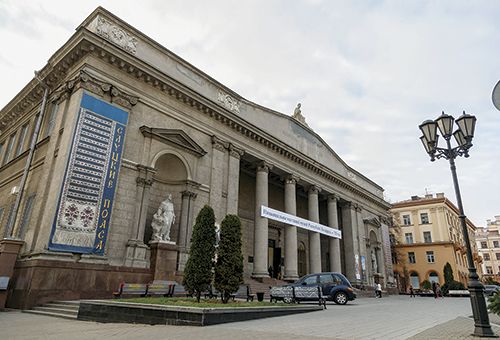 After the war, much was done by the former director, Yelena Aladova. She contributed greatly to the revival of the museum collection and is fondly remembered by colleagues and friends. Leonid Shchemelev, a People’s Artist of Belarus, praised her by saying: “My diploma work at the Institute — The Wedding — was lost under strange circumstances. However, in a stroke of good fortune, I found it. As a student, I heard much about Yelena Aladova and decided to bravely ask her for a piece of advice. After listening to me, she told me to bring my work. Of course, I was taken aback, failing at first to realise the opportunity I was being given. Of course, once I had gotten over the shock, I was in the seventh heaven. Since then, my work has been kept in the country’s main museum. Ms. Aladova accepted it not for its ‘beauty’ alone but for the skills involved; she was a true expert of fine arts and, thanks to her, the museum now boasts a worthy collection.” 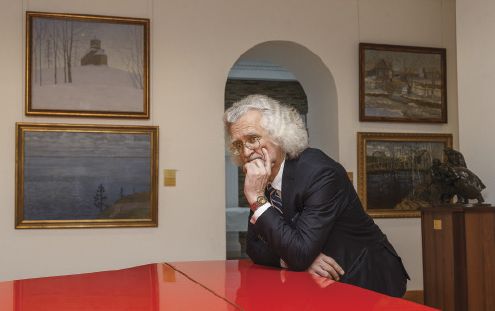 
At present, the National Art Museum has an active exhibition life, and also conducts several forward-thinking educational projects. All these achievements have been possible thanks to its present Director General, Vladimir Prokoptsov, who has been leading the museum for sixteen years and never stops producing new ideas — based on the understanding of the high status of culture and art in our time. It’s a true pleasure to talk to Mr. Prokoptsov; he openly shares his views on the museum business and admits that everything he’s doing is his vocation.

Should a museum try to shape visitors’ taste?

This is a must. A museum should not operate aimlessly: its mission is education and teaching. In effect, it’s an educational centre. At present, the museum is gaining a new role: to be active and ‘move’ outside its walls. Recently, we showcased the Portraits of Rulers of the Grand Duchy of Lithuania exhibition, gathering pictures from three Ukrainian museums, as well as our own. As part of the show, we organised a round table discussion with specialists and a major concert — featuring Lithuanian, Polish, Ukrainian and Belarusian musicians. It’s important for new exhibitions to reach out in different ways, since schoolchildren and adults enjoy different aspects of art. A considerable amount of money has been injected into our museum, spent in equipping halls and paying salaries. This is done to shape public taste and to educate. I believe that a museum must be aggressively active in this, keeping two steps ahead in our modern, global times. Visitors to a museum should be drawn in. Lectures and excursions help with this and I’m strongly convinced that a museum should aim at education: no other mission needed. 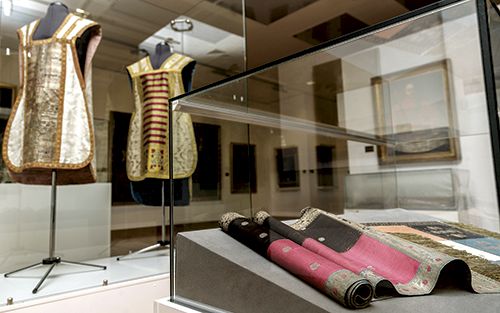 Do you want to develop museum infrastructure?

Of course. The idea of a museum quarter has enjoyed support at the highest level and investments are in full swing. I hope it will be completed within a five-year period.

What is the major function?

We’ll spread our collections out while creating infrastructure. Sadly, at present the museum lacks a decent café, which should seat at least 100 people and have specialised equipment (situated in Karl Marx Street). We also have a museum shop. I’ve visited many European museums: on entering a 200sq.m store, you see diverse books, albums, souvenirs (bearing the museum logo), decorations and much more. In fact, souvenirs account for around 40 percent of a museum’s profit. We’ll definitely enjoy all these in the future; I’d love to see this happen. A schoolboy could buy a magnetic souvenir for next to nothing while a foreign tourist can purchase a $50 catalogue or guidebook. I envisage all catalogues and guidebooks being published in at least three languages: Russian, Belarusian and English. I hope to see many Russians coming and I’d love tourists to be able to buy a pen featuring Chagall or an icon as a souvenir. The major mission of the quarter is to create a place in which to spend all day: coming at 11 a.m. and leaving at 7pm, taking a break at a café or sitting on a bench in the inner courtyard to enjoy the air. Afterwards, our visitors would return to the museum to see another exhibition. This would be the ideal situation for me and I’ll do my best to realise it. Crucially, we have the support of our Government. 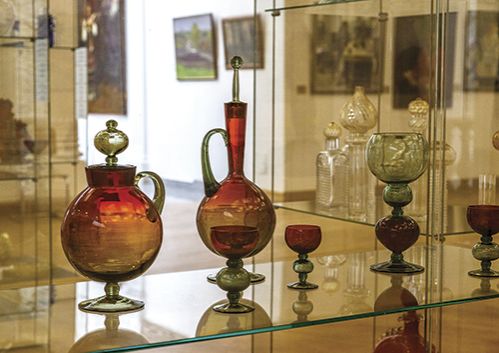 You aren’t shying away from foreign experience, are you?

Abroad, I focus not on pictures but on how they are displayed. I view the area as if I am an executive manager, paying attention to flooring and lighting. Pictures are secondary for me, as I’m learning.

In 16 years of your directorship, have you become convinced that modern visitors are more demanding and better prepared than before?

We have the Internet now, so people can take a virtual tour of the Tretyakov Gallery or another museum. Modern art lovers can take a Belavia plane to Paris: it’s just a two-hour flight to personally see the Mona Lisa. Nothing can surprise us now. Audiences are true gourmands: demanding and sophisticated. We need to be ready, in order not to lag behind in technology, exhibitions, methods and staff. Our new generation is changing; this is a global issue and a museum director cannot remain idle. I never stop keeping my staff on their toes, though some might not like it. In the 1960-1970s, the museum was a safe harbour but now it must earn money — promoting the country’s image and organising international projects. Our visitors wish to see a Marc Chagall show or a Tretyakov Gallery exhibition. Moreover, museum staff should know foreign languages. In a word, the museum format needs expansion.

With this in mind, the ‘fight for visitors’ continues…

We have to fight for each visitor and only interesting exhibitions and programmes attract visitors. An ideal modern museum is a large cultural industry — like Hollywood.

It’s probably difficult to manage such a ‘mechanism’?

It’s not simple; it’s a huge responsibility, as the museum is our country’s ‘calling card’. I continue telling my staff that — sooner or later — new people will replace us. The museum should not remain idle. It must work and, accordingly, I bear a huge responsibility as its head. I feel this heavily so it’s no surprise I’ve gone grey so early! 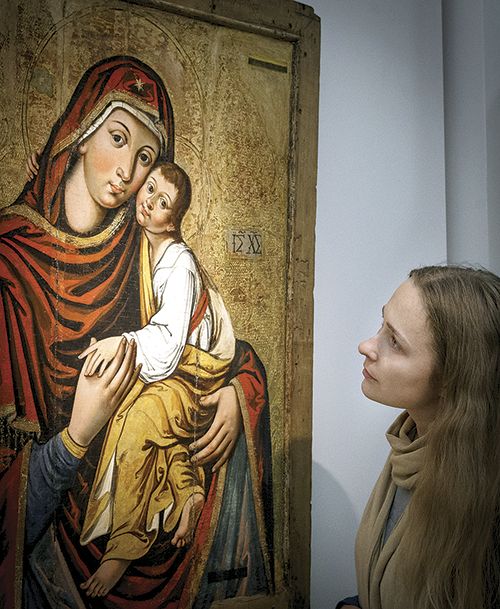 Is a museum director a manager or a specialist?

All of the above. I can hardly imagine a manager — rather than a painter or art critic — as a National Art Museum director. Can you imagine an economist heading the Hermitage or the Tretyakov Gallery? I personally cannot. A manager should lead an agricultural factory. If I’d chosen an agricultural path, I’d have become an agronomist and a farm manager. However, I’ve chosen a different path — that of a museum director who is a manager, an economist and an art critic. This is especially topical for such a large-scale museum as ours. Artists come to a director to discuss shows and other aspects. As an economist, what would I have told People’s Artist Georgy Vashchenko? We’d have found nothing in common and would have failed to understand each other. This is why I have no shame in continuing to learn something new.

Which criteria do you use in assessing the value of paintings for the museum?

We don’t purchase directly ourselves. Rather, a special council does this (as far as modern painters are concerned). If an article is to be bought from abroad — perhaps a Slutsk sash — we need to convince that it’s needed for an exhibition. However, a final decision is made jointly. Debate is usually organised for especially valuable artefacts. Generally, the museum community — headed by its director — dictates policy and, with this in mind, a director must be expert either in tenders or in pictures.

Do you suffer from a split personality: director Prokoptsov and artist Prokoptsov?

I enjoy complete harmony, as the former complements the latter. I did experience a split personality when working at the Council of Ministers, as I seldom took part in exhibitions. Back in the 1980-1990s, it was not encouraged for state officials to display their works jointly with artists. In contrast, I feel very comfortable now.

In heading the museum, you’ve arranged many foreign shows. Do you plan to exhibit the rich collections of the National Art Museum?

We have such plans and have already exhibited pictures by Khrutsky in Vilnius — as part of the artist’s 200th birthday celebrations. At present, we are working on a joint project with the Vatican, to show their Belarusian Orthodox and Catholic icons. Of course, such events require considerable insurance and planning.

Which artefacts would the museum be able to buy?

To make a purchase is a challenge. Primarily, this requires large amounts of money. If I had the budget I would not hunt for a Rembrandt or Picasso; I’d rather buy a Chagall and works by Parisian school artists. Our acquisition of two pictures by Chagall and two by Genin is significant progress. These artists are widely exhibited at leading museums worldwide … but not in their homeland. I’d address this if I had the chance.

Would you continue the phrase: ‘True art is….’?

It’s life. No life is possible without art. Fine arts make people spiritually wealthier, kinder and more harmonious. There is a set of cultural values which resemble behaviour rules (such as allowing the elderly to lead and respect for women). Why did ancient people make wall drawings? Even then, they were observing stars in the sky and were eager to reproduce something on the walls. In the morning, the stars disappeared but a handsome hunter or a scene from primeval life was painted on a wall. All these drawings are worthy of admiration. Many of them are a heritage, with museum value.

What attracts you in your present directorship?

I feel self sufficient as a director. I received my education in the field of fine arts and can speak to any artist or even the Louvre’s Director as an equal. I think I’m in the right place. I love my work at the museum. I’m happy here and feel comfortable.

Mr. Prokoptsov never falters in his love of art. It seems he lives in a different world — heading the country’s main museum and painting himself. However, as I discovered during our interview, these two ‘worlds’ are not in conflict, but rather complement each other.