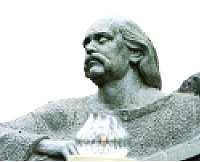 It’s said that a man is alive while the memory of him is alive. Eleven years ago, when Vladimir Mulyavin, the founder and leader of Pesnyary, passed away, it seemed that it would put paid also to the legendary ensemble. It happens often that a ship perishes without the captain. However, the case, begun by Mulyavin, is still in demand.

The other day friends and disciples, relatives and stage colleagues gathered at the grave of Vladimir Mulyavin at the Moscow Cemetery to remember how the history of the group began. Composers Igor Luchenok and Oleg Molchan, Mikhail Drinevsky, the Chief Conductor of the Tsitovich Choir, Sergey Kovalchik and Alexander Gartsuev, art directors of the Russian Theatre and Belarusian Drama Theatre, and Valentina Gayevaya, Head of the Khoroshki State Dance Ensemble, came to share their memories. Every one of them had their own history, connected with Mulyavin and his musical brainchild. They remembered, for example, how foreign tourists, coming to Minsk, bought Belarusian dictionaries to understand what Pesnyary were singing about. The song heritage of the group is a sort of gold reserve, not subject to depreciation, the Minister of Culture, Boris Svetlov believes. “Long ago, they already became the cultural history of our country. And, certainly, to a large extent it has become possible thanks to Vladimir Mulyavin. It’s difficult to imagine a more popular person that embodies Belarusian music.”
Заметили ошибку? Пожалуйста, выделите её и нажмите Ctrl+Enter