Ballet, comedy, tragedy, concerts and films to suit every taste

The popular Republican Theatre of Belarusian Dramaturgy is rehearsing three new stagings for the coming season, although critics note that the repertoire now tends towards lighter entertainment. Whether this is a good move is yet to be seen.

Recent premieres of the comedies Fint-Kruaze and Contract proved less than notable, and were obviously without festival potential. Valery Anisenko’s retirement is, so far, resulting in a poorer standard, and fewer festival diplomas. The Centre of Belarusian Direction and Dramaturgy, led by Alexander Marchenko, is looking more promising: especially its November premiere of the documentary Napeuna (Maybe). Its performance of Great Resettlement of Freaks, based on Nikolay Rudkovsky’s play, is also much awaited. The theatre’s repertoire already includes Rudovsky’s Living till the Premiere and Bergman’s Women (a real festival hit) directed by Yekaterina Averkova. The premiere of Love of People, based on Dmitry Bogoslavsky’s play and directed by Alexander Gartsueva, is also expected to draw praise, having enjoyed success at Moscow’s Mayakovsky Theatre.

The 45th season sees the Belarusian State Academic Musical Theatre staging six premieres. Mikhail Kovalchik is directing Sholem Aleichem, or Peace Be with You, People! with music by Belarusian composer Oleg Khodosko. Other popular performances will be the much loved musical Fiddler on the Roof, by American Jerry Bock, and the ballet Cleopatra set to music by Belarusian composer Sergey Beltyukov and staged by the head ballet master, People’s Artiste Vladimir Ivanov. Musical comedy Wedding in Malinovka, by Andrey Tutyshkin, is also likely to prove a success, staged by the Artistic Director of the Gorky National Academic Drama Theatre, Sergey Kovalchik. The Wizard of the Emerald City is being presented for children by Denis Nemtsov — in his debut as a director. The comedy In Love but Discreet, based Lope de Vega’s work is being directed by Anna Motornaya — known for her brilliant Pagliacci. An Evening of One-act Ballets, choreographed by Lyubov Andreeva, who studied under Valentin Yelizariev, completes the list of premieres. 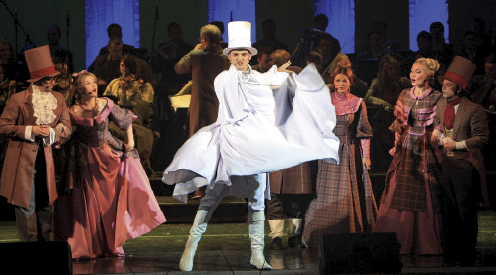 
Eight premieres are expected at the National Academic Bolshoi Opera and Ballet Theatre for the 2014-2015 season. At the beginning of October, Igor Stravinsky’s romantic Firebird, directed by Andris Liepa, proved a hit with audiences. A ballet in two acts, Laurencia, is being unveiled in December, directed by People’s Artiste of Georgia and Russia Nina Ananiashvili. La Serva Padrona (The Servant Turned Mistress) by Giovanni Battista Pergolesi and Kapellmeister by Domenico Cimarosa will continue the tradition of one-act comedic operas. Mikhail Pandzhavidze will stage Pagliacci, by Leoncavallo, on December 10th-11th, followed by a new staging of The Tsar’s Bride, by Nikolai Rimsky-Korsakov, next March. Audiences can then look forward to Yuri Troyan’s updated version of Boris Asafiev’s ballet The Fountain of Bakhchisaray. Next summer sees a new staging of Carmen (always popular).

The Gorky National Academic Drama Theatre will premiere Pesnyar, based on Vasily Dranko-Maisyuk’s play and directed by Valentina Yerenkova: a semi-fantasy devoted to the memory of Vladimir Mulyavin. The leading roles are performed by Sergey Zhbankov, Sergey Chekeres and Alexander Zhdanovich.

The Yanka Kupala National Academic Theatre is to premiere Father, directed by Yekaterina Averkova and based on Dmitry Bogoslavsky’s play The Quiet Rustle of Outgoing Steps. People’s Artiste of the USSR and Belarus, Gennady Ovsyannikov, plays a leading role, alongside People’s Artiste of Belarus Gennady Garbuk, Roman Podolyako and Sergey Rudenya. Theatre-lovers may already be familiar with Bogoslavsky’s play from its time at the Belarusian Drama Theatre.

The Belarusian State Puppet Theatre’s unusual version of Tartuffe, directed by the Chief Director of the Theatre, National Theatrical Award winner Alexey Lelyavsky, kicks off a season also featuring The Wolf and the Seven Young Goats and Munchhausen Show, as well as a performance for adults: The Birds by Aristophanes.

Full houses are likely for the Belarusian Republican Young Spectator’s Theatre premiere of Teddy, directed by Yegor Legkin. Its season opens with a premiere of How I Became... based on Russian playwright Yaroslava Pulinovich’s work. At the Gomel Regional Drama Theatre director Modest Abramov presents his premiere of Kill Me, My Dear Fellow, based on Turkish writer Aziz Nesin’s work. Gomel residents can also enjoy the premiere of Theatre, inspired by the well-known Broadway play by Michael Frayn, directed by Ukrainian Andrey Bakirov (known for his Midsummer Night’s Dream at the Kupala Theatre). This is his fifth performance on Gomel stage. Meanwhile, the Grodno Regional Drama Theatre will continue its July staging of Investigating the Accidental Death of an Anarchist, written by Nobel laureate Dario Fo and directed by Sergey Kurilenko.

The Mogilev Regional Puppet Theatre continues to concentrate on children’s performances: The Smallest Plane in the World and The Little Humpbacked Horse, and a new staging of Buratino and Alice in Wonderland.
The Yakub Kolas Theatre in Vitebsk continues its compelling staging of Abyss, by Ray Bradbury, marking the birthday of actor Tadeush Koshtys: last year’s Crystal Paulinka winner. Audiences are sure to approve of a new staging of Harold and Maude, directed by Vladimir Savitsky, the ever-popular King Stakh’s Wild Hunt, directed by Yuri Lezingevich, and She’s All That, directed by Alexander Marchenko.

Marking the 70th anniversary of WWII Victory, the Vitebsk collective is staging Do Not Leave Me, by Alexey Dudarev, and, for students, White Angel... based on Diana Balyko’s play entitled White Angel with Black Wings.

Saulius Varnas, from Lithuania, recently appointed as Artistic Director at Mogilev’s Regional Drama Theatre, gives us an innovative staging of Gogol’s Marriage, premiered at the end of July, last season, and launched again from September 25th. The Brest Regional Drama Theatre will premiere The Game of Love and Chance, by Pierre Carlet de Chamblain de Marivaux, directed by the Artistic Director of the Brest Theatre, Alexander Kozak (behind the Belaya Vezha Festival).

Thin Edge of the Wedge is scheduled for the end of October, at the Belarusian State Philharmonic Society, with composer Eduard Khanok’s best-loved works performed by Yadviga Poplavskaya and Alexander Tikhanovich, Inna Afanasieva, Larisa Gribaleva and children’s choirs. On October 24th, the Philharmonic will also host People’s Artiste of Belarus, Professor Igor Olovnikov, in a solo concert.

This autumn, film fans will be looking forward to Alexandra Butor’s White Dews Return, and the Minsk International Listapad Film Festival, which features a retrospective of Scandinavian film making.