The National Academic Bolshoi Opera and Ballet Theatre was built 75 years ago, on the site of Minsk’s oldest market, which stood until 1934

The National Academic Bolshoi Opera and Ballet Theatre was built 75 years ago, on the site of Minsk’s oldest market, which stood until 1934. The city authorities decided that Troitsky Market was on the perfect elevated site for a grand building.

In 1932, young Moscow architect Georgy Lavrov received first prize in a competition to design the new Minsk Opera Theatre and, on June 11th, 1933, the first stone was laid — on the day of celebrating the city’s liberation from White Poles: on Paris Commune Square. However, a few months later, Lavrov’s project was rejected as unrealistic and the contest was relaunched. This time, the winner was famous architect Iosif Langbard, who suggested creating a grand palace in constructivism style, with a set of sculptures and bas-reliefs. Inspired by Roman amphitheatres, he planned niches within the second and third circles of the facade, and in front of the entrance, in which to place statues.The auditorium was to seat 5,000 — although this was reduced first to 3,000 and then to just 1,500, over its five long years of construction. Sculptures and many other elements ‘disappeared’ but the central idea remained: three huge tiers, one upon the other. 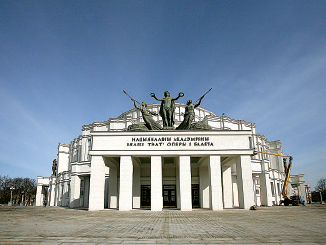 On June 24th, 1941, an aerial bomb hit the building and destroyed the whole auditorium. The troupe were evacuated and, on returning after the city’s liberation, opera singer Larisa Aleksandrovskaya recollected: ‘There is no Minsk anymore; just ruins, burning. Our opera company is located in a backstage section of the theatre. The stalls and boxes are now a stable for horses, filled with piles of manure. There’s no light, heat or water...’

The theatre was completely restored in 1948, overseen by Langbard. This time, tier balconies were added and sculptor Andrey Bembel created beautiful embellishments.

The building has been several times reconstructed in its long history, most recently from 2006 to 2009, based on photos from the 1940s-1950s and Iosif Langbard’s sketches.

Crystal chandeliers from the 1950s were added, alongside gypsum elements, painted ceilings, gilded mouldings, and curtains and drapes in red velvet. The interiors were made from natural marble and granite; the foyer floors used nine kinds of granite, incorporating an ornamental pattern.