In recent decades, Belarusians’ nostalgia for the past has begun to fade while aspirations of living in an independent state have grown 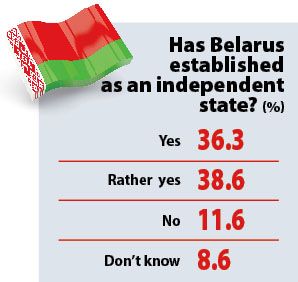 In 2007, ten percent of Belarusians expressed a desire to live in the renewed Soviet Union and 21 percent wanted to live in an independent state not linked to any other country. According to recent polls, conducted by the National Academy of Sciences’ Sociology Institute, 74.9 percent of the population believe that our country has established as an independent state since gaining independence. Over 25 percent are proud of this fact. 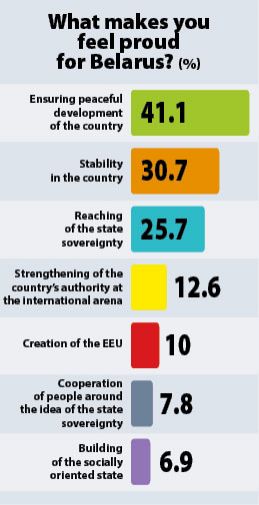 The grounds for this transformation in the minds of Belarusians’ are explained by a famous sociologist from Scotland’s University of Aberdeen, Kristian Harpfer. On visiting Minsk recently, he said, “Twenty years ago, Belarusians spoke of the uncertainty of their future. In the 1990s, they had no idea what would happen to their families and the country. People were nostalgic for the Soviet Union: its economic system, pensions and stability. Twenty years on, we are showing an enhanced feeling of stability and increased confidence in the future. People are more certain of the future for their families and children and feel safer. We see much less harking back to the past.”

The economic crisis has also significantly affected the Russians’ state of mind, as assessed by sociologists from the Levada Centre. In 2015, Russians more often experienced feelings of envy, aggression, anger, exasperation with others, fear and despair. Exhaustion, weariness, loneliness and embarrassment were more common, as was a rise in the number of cases of depression, indeed, similar le­vels were last seen in 2009, when the consequences of the economic crisis were being felt. Partly due to falling incomes because of the devaluation of the Rouble and continuing economic sanctions, the poll saw less evidence of positivity in the responses, with a lower rate of self-esteem, confidence, and hope expressed.

Against this background, a growing number of Russians felt nostalgia for Soviet times and sympathized with the Soviet political system, a significant increase seen from July 2015 to January 2016. The same level of support for the Soviet state system was registered by sociologists in 2009. From late 2015, Russians’ support of the western democratic model and the country’s acting political system has dropped. An increasing number of Russians believe that they and their families have lost out as a result of changes that have occurred in the country since the collapse of the USSR. The peak of this attitude was seen in December 2014, when the first wave of the fall in the Rouble took place.