The open-air workshop was organised in accordance with the plan of action of Belarus’ Year of Culture, and in anticipation of the 25th anniversary of the establishment of Belarusian-Chinese diplomatic relations. It also follows a co-operative agreement between the Confederation of Art ­Unions of Belarus and Chongqing Art Museum.

Over a period of around two weeks, Belarusian artists visited local attractions and scenic spots around the city, creating pain­tings. Most were dedicated to the theme of Chongqing’s natural landscapes, with all works then exhibited under the title Vagaries of Landscape. The key speakers at the ope­ning ceremony of the exhibition were the Executive Director of Chongqing Art Museum, Pang Maokun, the Chairman of the Confederation of Art Unions of Belarus and the General Director of the National Art Museum, Vladimir Prokoptsov, and the Counselor of the Embassy of Belarus to China, Sergey Vergeichik.

The exhibition opened with a speech by a representative of the Chongqing’s People’s Government, Li Shukui. He noted that Chinese people have enjoyed the chance of seeing national features of Belarusian artists’ works. As a symbol of stronger artistic collaboration and the spread of modern Belarusian pictorial art traditions, each painter presented a work to the Chongqing Art Museum. The exhibition aroused great inte­rest among the Chinese artistic community, attracting art critics, painters and the public. The Belarusian artistic de-legation gave a lecture and a brie­fing on Belarusian contemporary art, at Chongqing Art Museum, and took part in an artistic conference, under the ‘One Belt, One Road, Joint Prosperity’ slogan. The event is also inspired by the development strategy for the Yangtze River Economic Zone. Mr. Vergeichik views Chongqing as a cultural centre of Belarusian-Chinese cooperation. Artists from Chongqing have been invited to take part in the Chagall open-air workshop, which will be held in Vitebsk Region in July 2017, dedicated to the 130th anniversary of the birth of the famous Belarusian artist. The National Art Museum is planning to arrange an exhibition of paintings created during the 2016 Chongqing workshop.
Заметили ошибку? Пожалуйста, выделите её и нажмите Ctrl+Enter 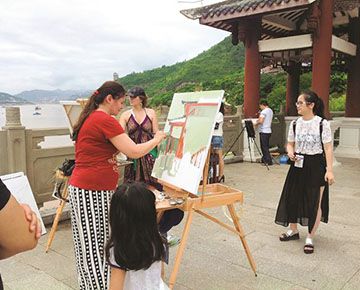