Almost immediately after his exhibition ended, I called Yuri, who was at home, having recently returned from Italy. We agreed to meet at the school in which he teaches art: a place where he feels relaxed. On entering Gomel’s secondary school #49, I was rather confused, as Mr. Ptashinsky looks very much like his senior pupils. Then he appeared suddenly, with a large camera on his shoulder. First I asked him about his own school days. 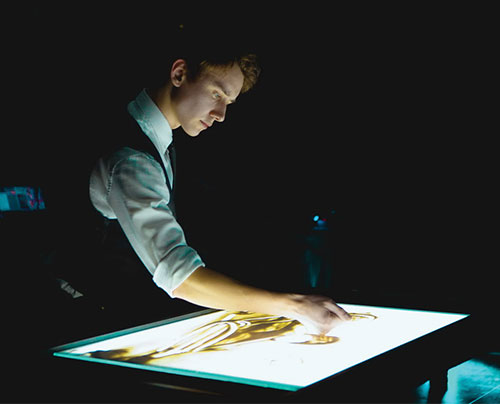 Drawing has been my passion since childhood. I inherited this interest from my father, who draws wonderfully, although he has a technical profession. I couldn’t resist this path, attending famous Belarusian artist Valentin Pokatashkin’s studio for four years. He is such a great person: all who meet him admire his artistry. I’ve been lucky to meet people so full of ideas and enthusiasm. When it came time for me to choose a profession, I decided to choose something artistic. I turned to architecture but, at the end of my University studies, realised that I had to place painting foremost. Accordingly, I took a teaching job, enabling me to do what I love. I have time to devote to my artistry.

Working with children can be difficult, can’t it?

Not at all! It’s great! Children remind us of what we lose on becoming adults. They can be so happy with simple things: snowfall, sunny days, insects and puddles. All these are a special event for a child while we adults notice nothing special, being too caught up with daily routine. Children have no idea of the pressure of being busy. They are relaxed enough to produce great ideas and images; some take your breath away…

Yuri admits that he hasn’t discovered his own style yet. Occasionally, graphics prevail but, some time later, he might turn to bright pictorial painting: a desert sea, night courtyards and unusual faces. Interestingly, his Cagliari promotional poster featured a girl’s face, wearing a red kerchief.

Is the girl a friend?

It’s my schoolmate, Yekaterina Dupanova, who is now a successful model, working for European agencies. She lives in Moscow these days. I love to discover not only interesting faces but new places, observing the rhythm of urban life: residents’ customs and traditions.

What inspired your interest in sand? It has no colour, taste or smell.

This was pure accident.

Yuri tells me that, four years ago, he happened to visit a Belarusian holiday agency site. They were seeking an artist and Mr. Ptashinsky, being ‘guided by a passion for new discoveries’, needed a job. Yuri was then a student of architecture but accepted the idea of creating a new form of artistry: sand graphics. He admits, “I was interested and decided to experiment. I trained, using equipment provided by the firm. I contributed my hands and imagination.”

Although the art of sand graphics is no longer so rare, Mr. Ptashinsky still surprises people. However, he remains modest about his abilities, while praising others who work with sand. He particularly admires some female sand artists in Minsk, saying that they create true miracles. Using just sand, a table and light, he creates realistic portraits, images of romantic couples under street lamps and rain drops on window glass. Even when you watch them being made, it’s hard to fathom. Yuri explains, “Of course, there are many tricks, such as the height from which an artist scatters sand onto glass, and the sand’s dampness. Even a minor mistake can ruin a picture.”

Yuri recalls a recent performance, when organisers forgot to bring sand, obliging him to tear about before the show, trying to find a solution. “I tried breadcrumbs (which I’d used previously at home with success). Sand is the ideal material, since it can be used to create any image at all,” he tells us. 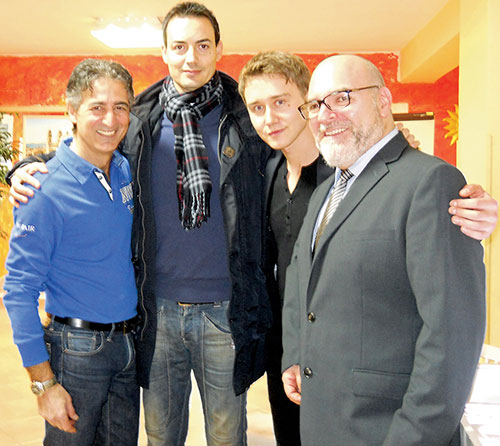 
In Sardinia, Mr. Ptashinsky’s sand shows certainly impressed visitors of the АСLI art gallery and hall. Yuri explains that he chose Italy, having fallen in love with the country in childhood. He notes, “As a schoolboy, I visited Italy as part of a recuperation programme, living with a wonderful family. I found a lot of new friends and kept in touch. Tarcisio Pani is among them. He’s 60 now but is still full of energy, passion and new discoveries. Once I told him that I was working with sand and he asked for a demonstration. He was impressed very much, proposing to show this art to the Italians. Incredibly, the country has much sand but almost nobody works with it. This is how my series of exhibitions came to be organised in Italy. Some time later, the project received support from the Honourable Consulate of Belarus to Cagliari, inviting me to bring my show to Sardinia. Everything turned out wonderfully and I’m grateful to all those who have supported me. I plan to return to Cagliari at the end of the summer, bringing my new programme and show. Beforehand, I’ll be organising an exhibition in my native Gomel, as I’ve only had one show there as yet.”

As our time comes to an end I can’t help but be struck by Yuri’s intelligence. He has found his true niche. However, I can’t but ask if he wishes sand was better recognised as an artistic medium. He answers openly, “Initially, this hurt me but I think now that nothing happens by accident. All events complement each other.”