The President of Belarus, Alexander Lukashenko, has recently taken part in a meeting of the Union State’s Supreme State Council held in Moscow. He also met the President of Russia, Vladimir Putin, to discuss topical issues concerning our bilateral co-operation and the development of integration processes. 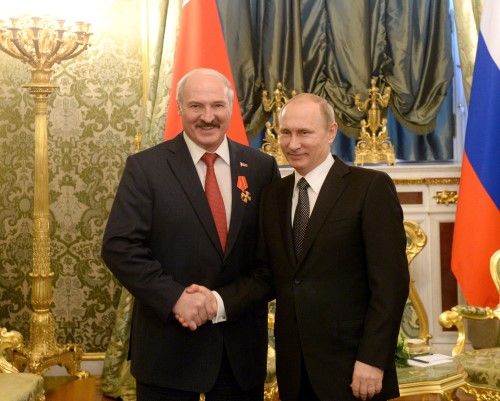 The Supreme State Council’s session was originally planned for late 2014 but had to be postponed. As the Eurasian Economic Union has begun to implement its agreements, issues concerning integration priorities have emerged. There are those who believe that the Eurasian vector is more topical at present and that the format of two states would be to risk returning to the mistakes of the past, but this view fails to consider that the EurAsEC made way for the Eurasian Economic Union when the latter became more advanced. As regards the Union State, such a shift hardly seems possible in the future. Apart from economics, the two-sided union enjoys defence integration, political co-ordination of action (including in the international arena) and interaction in the field of social guarantees. It would take a considerable length of time for the Eurasian Economic Union to reach a level of this kind; accordingly, there is no alternative now to the Union State as a flag bearer of post-Soviet integration. This is confirmed by the agenda of the top-level talks held in the Kremlin. At the start of the first meeting of the Belarusian and Russian presidents, Mr. Putin stressed that different integration configurations do not exclude each other. In turn, Mr. Lukashenko noted that the time has come to formalise all agreements achieved last year in the Union State format.

To open the Moscow meeting, the Belarusian Head of State highlighted the importance of the Supreme State Council’s session, “Last December, we discussed our relations with Kazakhstan, mostly in the economic sphere. We expanded the Eurasian Economic Union as Kyrgyzstan and Armenia joined us. We have previously discussed these topics at our meetings in Sochi and Minsk. Now we have an opportunity to formalise our talks and negotiations and make some concrete decisions, vital to move the situation forward in the current climate.”

Mr. Putin agreed, saying, “Much has been achieved in recent years but there is still work to be done. I’m now speaking of the establishment of a common market of Belarus and Russia and the creation of a Single Economic Space. However, the Union State also has issues which need solutions, particularly as far as social issues are concerned.”

Before the session, Mr. Lukashenko received a surprising honour when the Russian President awarded him with the Alexander Nevsky Order, a high award bestowed upon prominent Russian and foreign political figures and representatives of foreign businesses for their merits in co-operation with Russia and their contribution to its socio-economic development.

“The keynote of our event is that we’ve always been together in difficult times and at the present. We’ll jointly manage this difficult situation. Truly close nations and brothers act this way. The small minority who think that we are experiencing insurmountable problems can be reassured. In this current complicated situation, we know how to act and have already agreed to overcome it jointly, as is natural for fraternal nations”


The Supreme State Council session had over ten issues on the agenda. Among them were the results of the Belarusian-Russian trade collaboration in recent years and the fulfilment of the programme of co-ordinated foreign policy activities. As is traditional, the formation and spending of the Union State budget was debated: the new list of approved expenditure totals almost 5bn Russian Roubles (around 85 percent of the sum would be spent on the financing of 36 joint programmes and events). This time, the session had another important focus: an additional issue was put on the agenda dealing with the strengthening of the Belarusian and Russian governments’ efforts in enhancing bilateral trade co-operation. Recently, the issue of a possible loss of the Union State’s integration significance — against the background of the Eurasian Economic Union established in early 2015 — has been high on the agenda. But as Mr. Lukashenko explained, “We owe much to the Belarus-Russia Union, it has become an example while creating the Customs Union, the Single Economic Space and then the Eurasian Economic Union. As a result, we are now able to discuss the possible ‘integration of integrations’ and probably the expansion of the Eurasian Economic Union, primarily proceeding from its functions and authorities.”

The agreement on the establishment of the Union State was signed 15 years ago, the President stressed that it was a ‘landmark decision that did more than merely strengthen the strategic partnership of our fraternal nations’. As in any relations, economic co-operation faces problems from time to time. Mr. Lukashenko is convinced that our two countries have so greatly advanced in the issue of integration that it would be inexcusable ‘to lose forward momentum or create any barriers to further progress’.

The Supreme State Council session had several stages and the adoption of priorities and the more important mid-term tasks of the Union State were among the key issues. The 2014-2017 plan of action was briefly discussed and, according to the Belarusian President, “Our governments have worked on the document for a long time. It aims to define the steps for the Union State project to receive new dynamics and clear focuses for further development.” Mr. Lukashenko also spoke about bilateral trade co-operation, “Sadly, our turnover has fallen slightly in the last two years. An unfavourable foreign economic situation is the main reason for this. However, we may be blamed for creating some tension in our trading relations and unbalance in economic policy. As a result, artificial barriers for the free movement of commodities are created. All these barriers must be lifted. We aim to do this, whilst also creating a single industrial policy and a single market. These meet our common interests and are of great importance for other integration projects.”

Belarus and Russia have prepared a list of joint action to remove the existing barriers in mutual trade in both products and services. As Mr. Putin stressed, such measures ‘presuppose the expansion and participation of businesses in both states.’ According to the Russian President, Belarus leads among the CIS states concerning the volume of Russian capital investments: last year, they made $6.3bln. Belarus has also injected $2.3bln into the Russian economy.