Alfred Eder: ‘We have a good team’

The new head coach of the women’s national biathlon team of Belarus, Austrian Alfred Eder, is as fit as a soldier, and is certainly straight-talking.

The new head coach of the women’s national biathlon team of Belarus, Austrian Alfred Eder, is as fit as a soldier, and is certainly straight-talking. During the Open National Championship, held at Raubichi, he cut a distinct figure beside the shooting range, watching his skiers scrupulously. After each shoot, he demonstrated their target points on a tablet PC.

We chatted with Mr. Eder immediately after the last National Championship race: the mass start.

I know it’s hard to predict a long way in advance, but do you think Domracheva is heading for victory this winter?

I do, and I think that, by December, she’ll be on even better form, looking good not only for the World Cup but for the World Championship. All summer, Domracheva has been on a training high; undoubtedly, she is the best biathlete on the national team.

Darya is the unconditional leader but what about the other girls?

Nadezhda Skardino is recovering from injury but has regained her form after inter-season problems. The other girls are also progressing, although you may not be able to tell yet. In the coming months, you should see them catching up. I’m not at all concerned by their progress at the moment.

Do you know yet who’ll be going through to the World Cup stages?

Besides Domracheva, for certain Skardino. I’m sure that, in a few months’ time, she’ll be back on her old form. The line-up won’t differ greatly from last year. 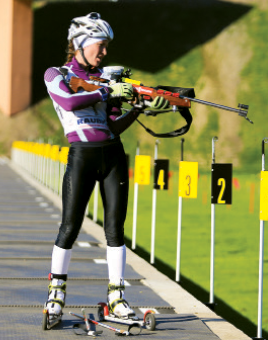 Have you seen our junior Belarusian biathletes? What are your impressions?

Yes, I’ve been watching them during competitions and we’ll begin involving them soon, gauging their future prospects.

When were you asked to head the women’s national team of Belarus?

I was approached last winter, as Klaus Siebert still had problems with his health. He was returning to Germany to continue treatment. I asked for some time to consider and, in the summer, decided to work together for some months, and then aceepted the invitation.

How easy has it been to take on the Belarusian biathlon team?

I know the squad well, having watched it last winter, at tournaments, and in previous years, at World Cup stages, and at the Olympic Games. It was easy for me to take on their training, and I have the help of two Belarusian coaches; we are a good team.
Заметили ошибку? Пожалуйста, выделите её и нажмите Ctrl+Enter