The charismatic actress was simultaneously celebrating her birthday, with fellow actors, colleagues, friends and relatives joining her for a post-show party.

People’s Artiste of Belarus Olga Klebanovich, a leading actress of the Maxim Gorky National Academic Theatre, has again confirmed her ability to transform into characters noble and humble. Radiating contentment, grace and calm, she appeared in Somerset Maugham’s Circle of Love, directed by Modest Abramov, with proceeds going to charity. The charismatic actress was simultaneously celebrating her birthday, with fellow actors, colleagues, friends and relatives joining her for a post-show party. It is easy for young actors to play with Olga Klebanovich. Next to Yulia Kadushkevich as Elizabeth

Ms. Klebanovich is among the most acclaimed and accomplished actresses of our modern times. As the older generation of theatrical critics admit, she has the power to heal hearts. Her artistic range is diverse, features over 100 roles in five theatre decades. Each role is brought to life in her own unique style. Of course, she is not everyone’s favourite but her power to connect with audiences is indisputable, causing them cry and laugh, grieve and cheer. Each appearance is applauded; she has many fans and always receives bouquets at the close of the curtain. She has the power to exert catharsis.

Where from does her talent originate? Probably, her love of life, spiritual sincerity and openness; she breathes this into her characters, for public enjoyment. She is also generous towards her acting partners. People’s Artiste of Belarus Alexander Tkachenok has been performing alongside Olga for many years and explains, “Everything began with The Only Heir: our first performance together. I’d only just joined the theatre while Olga was established. Our teacher was wonderful [director Vladimir Malankin]. We shared the same outlook on our profession, as if having the same ‘blood type’. We had a spiritual bond, which allowed us to understand each other, playing husband and wife or brother and sister. At the moment, we’re playing lovers in Circle of Love: I play Lord Portes. It’s all a great success.” Mr. Tkachenok continues, “Of her many talents, Olga is also a born teacher, often advising young actors, who heed her well. She’s easy to chat to, so forms friendships (on various levels) with a wide range of people. I’m quite different, although we certainly do share the same views on theatre and many other aspects of life. We are like fond siblings.”

Olga’s other colleagues at the theatre also appreciate her, regularly praising her as being easy to work with, while admiring her spirit and energy. Having spoken to her often, I agree that her warm personality encourages you to relax; no one could call her cold or reserved. Nor does she stand aloof from those who lack awards and titles, or who stand on a different hierarchy in the theatrical world. She chats to everyone: dress and set designers, props masters, technicians and up-and-coming actors.

The regard in which Olga is held is typified by the party, organised by the theatre’s young actors, to celebrate Ms. Klebanovich’s birthday. Meanwhile, all those attending her performances of late have stopped by the three large posters placed in the theatre lobby (since February), to have their photo taken with their idol. The pictures depict her on stage and in the ‘real’ life, one featuring her as a first year student at the Theatrical Institute (taken by a Moscow photographer in Minsk). Afterwards, she was shot for the cover of popular Soviet magazine Ogonek. Another one shows Olga as Stepanida in Bykov’s Sign of Sorrow, for which she won Belarus’ State Award. The last captures her addressing the audience. 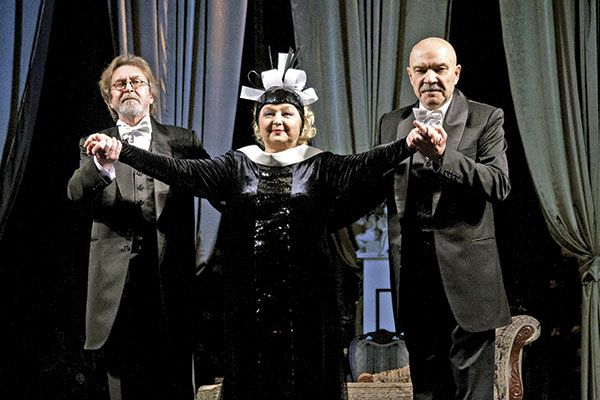 The grand finale of Circle of Love. Next to Olga Klebanovich (Kitty) stand Alexander Tkachenok (Portes) and Ivan Matskevich (Champion)

I could speak endlessly of her roles, savouring each nuance, although I’ve not seen every show in which she has appeared. My own experience of seeing her performances is that she is able to penetrate the psychology of a character, making us believe in them implicitly. It is as if she creates a whole backstory. Moreover, she manages to find new gestures and intonations with time, developing her roles. She truly takes on each new persona, so that her own is utterly cloaked. Her ‘women’ may have seeming similarities, yet she makes them unique through their footsteps and movements, their manner of laughter and tears, and the tone of their voice. It is a rare skill. Think of her Felicita (Ostrovsky’s Truth Is Good But Happiness Is Better), Esfir Lvovna (Ulitskaya’s Esfir) and Khanuma (Tsagareli’s Tricks of Khanuma).

Olga explains that her success is rooted in the ability to observe and perform, saying, “On taking a role, I begin thinking. A playwright depicts a character and his habits, inspiring me as to how he would walk, smile, speak and look. I remember playing Anna in Alexander Galin’s Stars in the Morning Sky; my intuition whispered to me to find something similar in real life. I came across a homeless woman and followed her briefly, observing how she ate, drank and looked at passers-by. Of course, in some cases, there’s no need to search out inspiration, as I can draw from memory. I’ve toured Georgia, meeting wonderful local people, and this helped when I played Khanuma, as I recalled Georgian women’s particular manners and appearance. As regards avoiding repeating myself, you can manage this if you achieve true understanding of your character. No two people are identical.”

Ms. Klebanovich continues, “As for Lady Kitty, her actions are such that there is a danger of alienating audiences. She has a wonderful husband but she fails to appreciate him and runs away, although she later regrets her action, and that of having left her son. I knew that my Lady Kitty could be different: extravagant and eccentric, though slightly foolish. I didn’t want her to appear silly in any way. She hides her guilt for many years, until her mask is lifted. I attempted to give her dignity, intellect and, even, wisdom (garnered over a lifetime). I hope that Circle of Love helps people understand that we are often hostages to the choices we make. We should not blame Fate for our feelings of guilt or regret. If I’ve succeeded in this, I’ll be truly happy.”

The performance begins in the house of Kitty’s former husband, Clave, (played by Ivan Matskevich): a gentleman wearing his own mask. With him are his son, Arnold, (Ruslan Chernetsky) and servant George (Alexander Brukhatsky): the latter a typical character for an English house. Arnold’s wife, Elizabeth, is played brilliantly: with fashionable delicacy in the shape of Yulia Kadushkevich and with spirit by Yelena Stetsenko. Arnold’s friend, Teddy, (Ivan Streltsov and Sergey Zhbankov) is secretly in love with Elizabeth.
All await Kitty, as Olga admits, with perfect charm and talent. Handsome and talented Mr. Chernetsky plays Arnold with great humour, allowing us to mock his pedantry and passion for idealistic politics. Unsurprisingly, Elizabeth chooses his lively friend over her husband, echoing the decision taken by her mother-in-law, Lady Kitty. Both characters are full of life, seeking true and deep feelings. Like his father before him, Arnold fails to provide his wife with this comfort. It is as if the younger adults are like children, playing adult games, with a childish attitude towards love and a penchant for pleasure that is mindless. The tragic paradox is that youth is the time for great passions and true feelings. The wisdom of the play is that appreciation of what is lost is only gained in retrospect. As Elizabeth and Teddy run away together, Lady Kitty realises that she need no longer regrets her own past actions: all is as it should be and as it always would have been. She proclaims: ‘Everything has returned to me’.

Olga Klebanovich performs Kitty with huge professionalism, entering the chilly English house like an exotic, colourful bird, bounding with energy. She shocks, surprises, embarrasses and delights, aided by extravagant costumes designed by talented Tatiana Lisavenko. By the end, she realises that her mask, behind which she hides her guilt at leaving her son and husband, and her desire to make amends, is her true self.
Using psychological twists, Ms. Klebanovich appears in various guises through the play: concerned, wishing her son to avoid the torment of being abandoned by his wife; fearful, of her daughter-in-law; and sympathetic, in explaining her past to Elizabeth, and when she attempts to stop Lord Portes viewing a photo of her in her youth. Lyrical comedy transforms into drama as Kitty rises, turning away from Elizabeth and Lord Portes, sweeping away her tears. We see that Kitty has deprived herself of the happiness of motherhood and is paying the price. The play does not focus on the price of passion, although Kitty does flirt a little when Lord Portes tells her that she’s more beautiful now than ever.

Abramov’s performance lacks a sanctimonious moral, although audiences receive a clear message that women should avoid abandoning their children and husbands. Rather, he urges us to revisit scenes from our own past, urging us to gain understanding of our own decisions and their consequences. We cannot learn from others’ experience, only our own, but Circle of Love does manage to stir us to reflect on our own regrets and ‘failures’.