According to safe plan

There are currently 437 nuclear power generating stations situated in 31 different countries around the world. Every tenth kilowatt-hour of electricity produced in the world is created by this process. Very soon, Belarus will join this group. 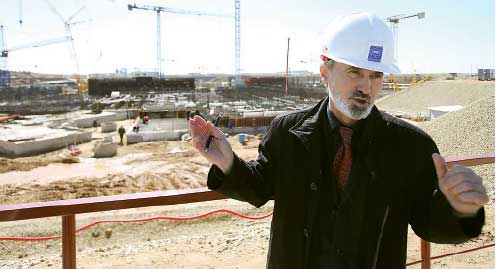 A delegation of experts from Russia, France, the USA, Ukraine, Slovakia, Italy and Iran recently visited Belarus. They took part in a seminar—Exchange of Advanced Experience of Launch of Nuclear Power Station— which was held at the well-known construction site near Ostrovets. There was a reason for the visit, as the current countries-participants of the World Association of Nuclear Operators (WANO) traditionally worry about new entrants into this field.

“With the appearance of the first energy unit, your station becomes a partner of all the others. We wish to share our experience and developments to ensure that as few problems as possible appear in the future. Meanwhile, we should make certain that our new partner is ready for exploitation and is of no threat to itself or the international community. We’re glad that Belarus has met us halfway. It enables the WANO Moscow Centre to provide a plan of work so that you can begin to take part in meetings with specialists from all over the world, and prepare for the prelaunch partner checks that are conducted before hot and cold operational testing and the loading of fuel into the reactor,” underlines Vladimir Bronnikov, the Advisor of the WANO Moscow Centre.

The construction of the Belarusian nuclear power station is not a secret, kept under lock and key. The directorate of the Belarusian Nuclear Power Station is willingly ready to share what has been achieved so far. The construction site of the country’s first nuclear power station already has the foundations and basement of the first power generating unit, the reactor compartment, the structure of auxiliary buildings, the containment building, safety and nuclear control. Similar work on the second power generating unit is still in the early stages. The necessary concrete and armatures are not brought from abroad, but are supplied from our own industrial shops that operate close to the huge construction site.

To give us an idea of the scale of the construction, the Chief Engineer, Anatoly Bondar tells us, “Five thousand cubic metres of concrete were spent on the foundation for the basic building of the reactor compartment where the reactor will be installed, together with the so-called ‘double protective cover’ which has a diameter of more than 50 metres and is about 2.5 metres thick. The sizes and future containment are impressive. The first ‘layer’ is 1.2 metres thick, an external cover, which will be 0.8 metres thick, will be located at a distance of 2 metres.It will be capable of protecting against any hurricanes, cyclones or even a direct crash by an airplane. As a rule, the cost of the safety systems, make up around half of the cost of a power generating unit.

The first power generating unit will actually look rather modest against the background of the first cooling stack— the equipment used for cooling a considerable quantity of water by the directed flow of atmospheric air. This structure will be 167 metres high and have a diameter of 132 metres. The water will be supplied from the river Vilia through a 5.5 kilometre pipe.

The construction of the Belarusian nuclear power station seems huge against background of the other project — the capacity output system. Its construction was started in parallel, with the erection of reactors from the Chinese company NCPE, and specialists from Belenergo. To connect with the existing power supply system, it will be necessary to erect more than one thousand kilometres of overhead power transmission lines, with a voltage of 330 kilovolt, and to reconstruct and modernise over 670 kilometres of existing lines. The project will cover three regions — Grodno (512.8 kilometres of electric power transmission lines), Minsk (350km) and Vitebsk (169.7km). On top of this, the reconstruction of four substations and the construction of new substation will also be carried out.

“According to the schedule of movement of the work force in 2014, about 3,500 people work on the construction of the Belarusian nuclear power station. The maximum number of employees will occur in 2017, when almost 8,500 people will work on at the construction site,” Anatoly Bondar notes. After commissioning of two power generating units, the number of personnel required will total 2,000 people. The first experts and workers have already moved into the new buildings of one of the three planned micro-districts in the suburbs of Ostrovets, which is 22 kilometres from the workplace. The designers promise that, during the coming years the centre of Ostrovets will move here. While its present centre will, in turn, become a suburb. Drafts of the new city are similar to modern cities in European countries with amenities like an ice palace and aqua-park. The only distinctive feature will be the Belarusian colouring. It is expected that the population of Ostrovets will multiply many fold to around 20-30 thousand people.

How do they arrive at these figu-res?“The number of personnel has increased threefold and these people will have families. It is also necessary to feed and provide services for these people as well as to educate their children. The city will need vendors, consumer services, doctors, teachers and kindergarten teachers. All of them will need to live somewhere. Approximately 30 percent of the accommodation will be farmsteads. These will be given to the experts, whose activity will be connected with the control of the reactor. They should have a good rest after work and be in a good mood when returning the next day,” says Eduard Svirid, the Head of Information Work and Public Relations of the Belarusian nuclear power station.

The project, which is used in the construction of the Belarusian nuclear power plant, under the coded title ‘AES 2006’ (NPP-2006), meets ‘3+’ security system in its security degree which is based on both the active and passive principle of action. Russia has already put into operation two such energy units in China and one in India, where another energy unit is likely to become operating soon. Russia has accumulated huge experience in the designing, construction and conducting of a range of work within the borders of the Russian Fe-deration  and abroad.