Ability to ‘cream’ off more

At the time when ministers and producers rack their brains over how to maximise warehouse benefits, farmers are successfully selling their products on the foreign market 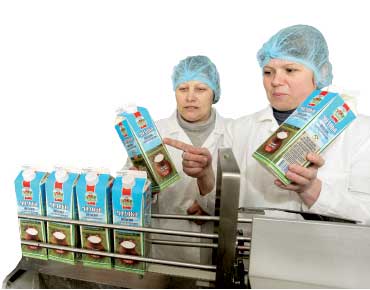 At the time when ministers and producers rack their brains over how to maximise warehouse benefits, farmers are successfully selling their products on the foreign market. Production is in great demand, with milk being the strategic commodity.

We drink a lot of it, and we sell a lot of it. Last year, we produced 6.65 million tonnes of milk of which 3.6 million tonnes was exported, creating $2.3bn of revenue. Russian and Kazakhstan citizens have long since fallen in love with our dairy products. About 95 percent of dairy production goes to these two countries, and currently, the situation is very much in our favour. Russian milk imports have grown twice during the last year. There are difficulties with manufacture of native milk in Kazakhstan as the environmental conditions are not appropriate, and it is difficult to form full-fledged fodder supplies for the cows there. As demand for foodstuffs, including dairy products will grow on the world market; why not use this as a chance to ‘cream’ off more from dairy exports?

The government is betting on an increase in the volume of output. The Deputy Prime Minister, Piotr Prokopovich, while speaking before the parliament, cited such statistics, “If today we had 2.5 million cows, as in 1992, and each cow gave five thousand litres of milk, we would receive an additional $5bn in exports, and there would be no unbalance in the economy.”

These conclusions are quite logical, but it is difficult to reach such indicators in the near future. To reach the earlier planned 10 million tonnes of milk in 2015 is, apparently, not possible. But then, perhaps, it is necessary to try to move the focus from quantity to quality. According to experts, in order to adequately react to changes of world conjuncture in the future and to increase exports, manufacturers should have greater safety factors and think, not only about increase in output volumes, but also about the improvement of the quality of raw materials that directly influence an increase in profits. It means that by increasing the quality of the initial raw materials, then it is possible to count on a solid financial increase, including by an increase in exports.

The quality of milk depends on many parameters, from commercial dairy farm equipment (it should be modern) pre-coolers, coolers, milk clearing filters, water and so on. The country has companies producing this equipment. However, it would be desirable to have more managers who can think about potential prospects. Natalia Kruglei, who heads AgromirGroup Company, says, “When following certain conditions, the cows initially give good milk, the task of people is to not spoil it. For this purpose, it is important to follow the technological cycle of the production of raw milk, including clearing, cooling and storage so that we have a pure and qualitative raw material ready for the arrival of the milk tankers. But due to various reasons, many heads of households do not rack their brains on solving this problem, preferring to work in the old style.”

It is true that many directors and chairmen do not often have time to think  about new equipment on the farm. Today they have a sowing campaign, tomorrow, the preparation of fodder, then harvesting. They worry about the current state of affairs, and see effective technologies as a whim. Some consider it as a superfluous expenditure of money. But there are situations where, by saving money, one can bring harm to an enterprise. After all, nobody today would buy a spade instead of tractor, because they would wish to maximise the return at a minimum cost,” says Ms. Kruglei.

Everyone understands that, in order to increase milk yields, it is necessary to give cows more water. However, it should be pure water. Do all workers follow this rule? Probably not, because maybe somebody has decided that the necessary filters, used for purifying the water, are an unnecessary expense. There are also many heads who are simply too afraid to make decisions. These stereotypes of the Soviet period should be removed. Market forces show us that saving on little things today could bring big losses in the future. This is an unacceptable situation.