A game for which we must live

Kamil Kamal’s Plays at the Ends of the Earth successfully showcased at the National Art Museum of Belarus, featuring paintings, graphic arts works and sculpture from past three decades 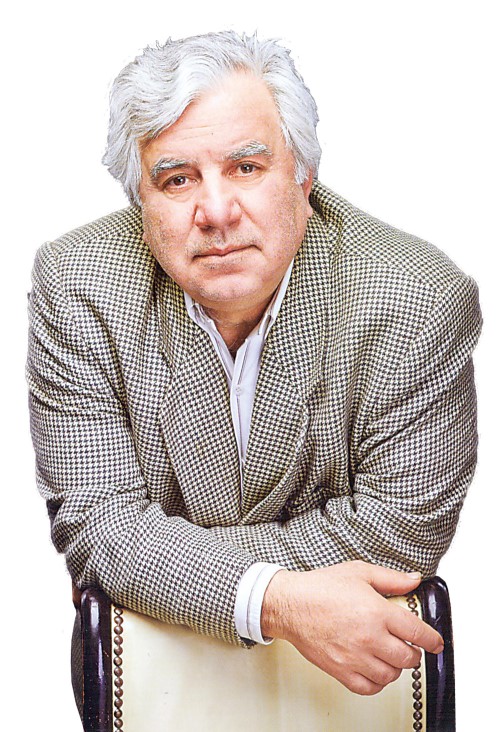 Symbolically, the artist’s first exhibition — hosted by the National Art Museum 20 years ago — had the same name. Since then, Kamil Kamal has created many projects, becoming a bright representative of modern Belarusian art. His lithographs and etchings are executed with virtuoso skill, combining the realistic and surreal: harmonizing colour while offering tension and resistance. The artist is a master of all forms of monumental art: painting, mosaic, stained glass and sgraffito.

Mr. Kamal’s speculations on the fleeting nature of life and of eternal existence are fantasies resembling multi-coloured children’s dreams. He is a philosopher, with a many-sided approach, as demonstrated at the Minsk show.

Mr. Kamal tells us, “My first teacher at Leningrad’s Ilya Repin Art School, Yevsey Moiseenko, was born in Belarus. He loved to say that ‘monotony is worse than ugliness’ and I’ve always remembered those words. Any trend — in sculpture, graphic art or painting — should focus on human kindness: a value gradually disappearing. I’m hugely thankful to this land and this nation for allowing me to find my talent. Belarus is my favourite ‘home’, to which I devote all my artistry — with its joy, sorrow, poetry and philosophy. Our life — whatever it is — is the game… for which we must live.” 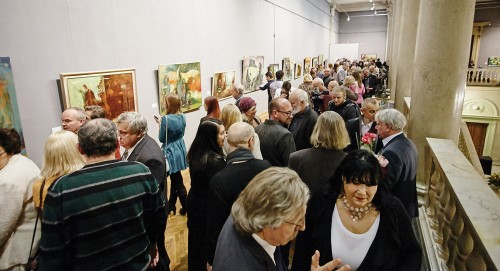 Thirty years of Mr. Kamal’s life are closely connected with Minsk, where he began his path as a professional artist. Born in Georgia to an Azerbaijani family, Kamil has become a true Belarusian, enriching our national art with his brilliant works: bright and enchanting, with depth and melodiousness, Eastern accents and lightness of touch. Reality merges with invention, and new images are born, ready to touch the soul. The unique artist received a pictorial and monumental education.

The recent show shows him again sharing his knowledge and experience with the coming generation at the Belarusian State Pedagogical University named after Maxim Tank. “The story lies in the picture,” explains the artist. “My words might be wrong but, on seeing my picture, a person can find more for himself.” Mr. Kamal’s works are full of philosophy, reflecting his original outlook and view on human relations and feelings. You can spend much time surveying a single picture, so rich is each in detail. They disclose his endless imagination and world outlook.

The Minsk show features 30 of his monumental works, including Tree of Life — a sculptural composition of a fountain located on Minsk’s Traktorostroiteley Boulevard — and monuments to Belarusian liberators in Mogilev and Vileika. Mr. Kamal has decorated works by Vasil Bykov and Rygor Baradulin, with touching and delicate illustrations. Meanwhile, his unique etchings and lithography are fascinating. 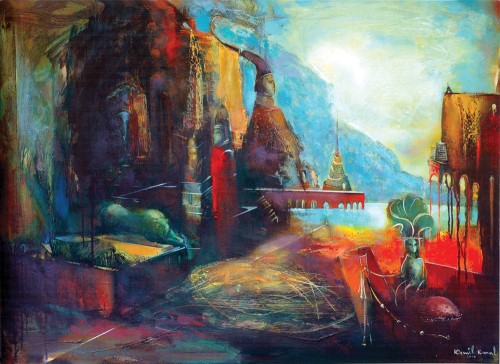 
“Our attitude towards art has changed, with some people more interested in the frame than the picture! I have no wish to encourage such an attitude but I also want to avoid my exhibition looking out-of-date so I enlarged my Puzzle clay sketch to 5 metres, using metal wire. It stands by the museum entrance and sets the mood for the show,” notes Mr. Kamal.

All his exhibitions, irrespective of venue, are organized under the Belarusian flag and Mr. Kamal has demonstrated his works in Poland, Turkey, Germany, Azerbaijan, Austria, Holland and Italy. Not long ago, he took his show to Belgium, where it was hosted by the European Parliament building. Mr. Kamal is known in many countries, being praised by foreign media not only as an accomplished master but as a representative of our country, bringing praise upon Belarus.

“It is joyful and interesting for me to paint my own world. I consider art to have no limits; everyone sings their own song. Art is boundless and immense. Those who are true to themselves endure, while those who are insincere will disappear, as if they never existed. I know one thing: that I love life, my family — brothers and sisters, friends and the whole humankind. It is the secret purpose of my creativity.” 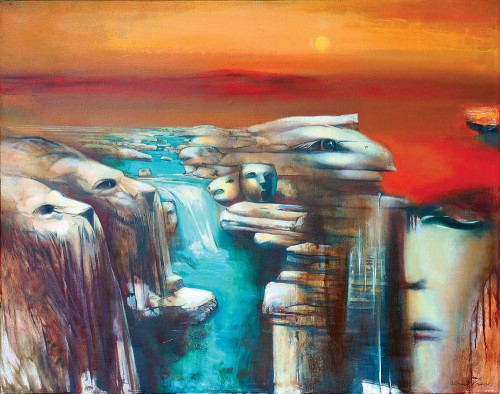 
Such is the creative credo of artist Kamil Kamal, born in Azerbaijan but now a citizen of Belarus. He attended Russian and, later, Belarusian art schools, creating canvases filled with imaginative and philosophical reflexions, childhood memories and past experiences. He balances between reality and fantasy, trying to catch the imperceptible essence of each moment, without haste.

You will never confuse Kamil Kamal’s pictures with others as he is so original. Bright, sincere and joyful, his pictures present us with lifelike characters, who then inspire us to examine our inner self. What is life if not an aspiration to eternal meaning?

Kamil often has personal exhibitions in Turkey and Azerbaijan and is known for his Eastern mentality and themes, from his childhood. Of course, the European art school has affected his development, becoming interwoven into his art. 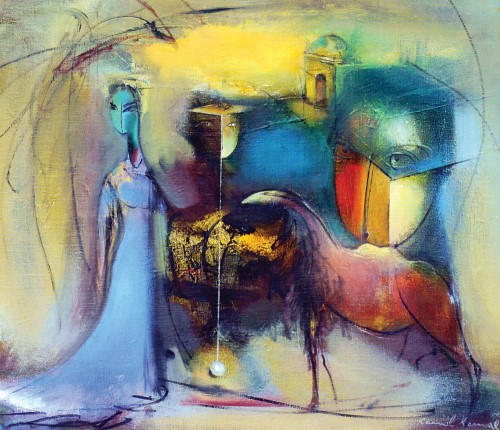 
Kamil Kamal was born in Georgia and took his first creative steps at the Asaf Zeynally Music School in Baku. He finished three years at Leningrad’s Academy of Arts named after I. Repin and then attended Yevsey Moiseenko’s studio, learning classical principles of painting and the realistic school. Before arriving in Minsk Kamil lived for some time in Moscow, then — in Kiev.

In 1984, Kamil became a student of the Painting Department at the Belarusian State Theatrical-Art Institute, mastering the skill of colour separation under the direction of Professor Piotr Krokhalev. After some time, he joined the Monumental and Decorative Department, uniting his original perception of the world and principles of mastery.

People’s Artist of Belarus Gavriil Vashchenko (then head of the chair for Monumental and Decorative Art) recollects, “He had an uncommon creativity and, despite being far from his native land, preserved his national traditions. I had no yearning to change him. In fact, he had his own desire to preserve his originality and to remain different from Belarusian artists.” 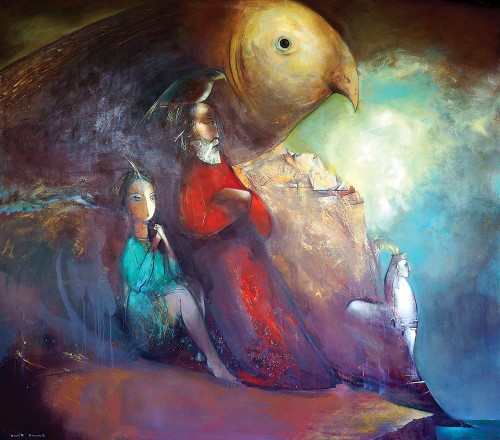 
Kamil’s independent creativity found expression through mosaic, painting, and encaustic and stained glass works, depicting the world through abstracted images. He concentrated on form and expression, using symbolism, generalisation and philosophical reflections. His monumental works have refinement of line, harmonious colours, delicate plots and natural plasticity of human form. In his early works, he gave great value to symbolism and space, ensuring that his pieces have depth. For his diploma thesis, he created a monumental painting entitled Dream Call, measuring 380m square.  His multi-figured painting hangs in comprehensive secondary school #181, in one of Minsk’s micro-districts. For this, he received a scholarship from the Union of Artists of the USSR.

Kniga (medical book), as well as in cafe Kolobok. Meanwhile, his stained glass is on show at Astara restaurant. Some works remain unfinished, such as his stained-glass Educators of Azerbaijan. 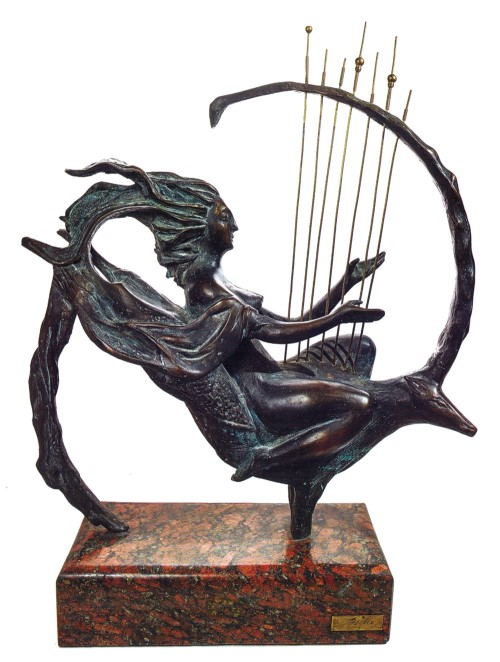 
Unfortunately, in the early 1990s, the economic situation prevented the development of monumental and decorative art, with most monumentalist artists turning to easel painting. They, including Kamil, brought with them a greater degree of figurative expression.

Kamil’s small studio is in the Minsk art-production complex, under the Belarusian Union of Artists. The modest wall space is covered in his most cherished pictures, which he wishes to keep always. In fact, he parts only reluctantly with his pictures and often refuses to sell them: the fact he never regrets. He is very choosy about the one who buys his paintings.

He notes that Diogenes is his idol, having set himself above financial gain. Like his hero, Kamil does not seek out financial benefit, preferring to seek out ‘people’.

His works have an element of mystery and are inspired by works of literature: by Pushkin, Omar Khayyám and Confucius. He sees himself as ‘a mediator between people and God’ and is fascinated by the image of the dervish: a Muslim mystic. Like the dervishes, his philosophy of creativity is based upon his personal relationship with God, through silent contemplation. Among his works are Dervish Passion, and Dervish: Pipe of Life. Each depicts a lonely human figure disappearing onto the horizon. Dervishes represent wisdom and, for Kamil, even birds can be dervishes. In Dervish Bringing Light, a vague human figure arises from viscous brown-yellow space, seemingly moving forward. A bearded old man bears a candle in his hands, as if seeking truth in a sea of spiritual impoverishment. We sense that the path is difficult. 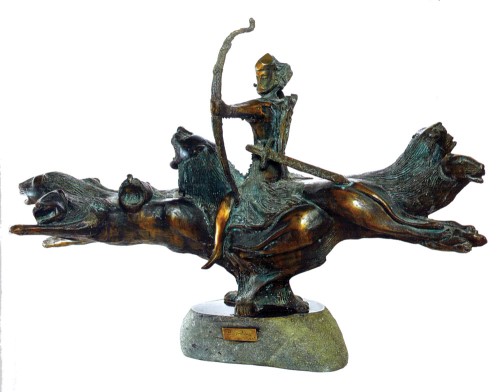 
The theme of spiritual searching is common through literature and art, especially works from the East, where the human condition is often viewed as a journey to wisdom. Hodja Nasreddin wrote that one person might spend his life sitting by a roadside dusty chaikhana, telling fairy tales to the dumb wind, yet the whole world might know him. Meanwhile, another might travel the world, behaving like a madman, with ‘his dusty language beating in his mouth, like a mountain river against rocks’. He asserts that ‘nobody, except the road dust knows where his good-for-nothing feet walked or where his traceless wheels ran’.

The artist tells fairy tales on canvas, creating a picture of the world of today and the past. One of Kamil’s most loved works is called Destiny of My Favourite City. A high rock rests against the dome of the sky and we see camels but, instead of humps, one bears the silhouette of an ancient city. His aspiration was to show the painful and difficult destiny of the Motherland.

Almost all Kamil’s pictures are symbolic, with trees representing life, and birds symbolising eternity. We see lions, tigers, elephants and goats, as well as fantastic beings, angels, stones and flowers. These islands of eternity and forgotten pieces of paradise comprise children’s dreams and fairy tales.

During recent years, Kamil’s talent has been revealed unexpectedly through delicate lithographics and etchings, used to illustrate books written by Ales Karlyukevich, Ganad Cherkazyan, and Timur Zulfikarov. Each has depth of meaning. 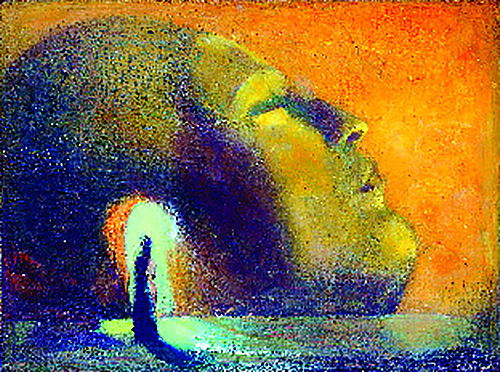 
For the past few years, Mr. Kamal has become fond of sculpture, casting in bronze and playing with light and shade, leaving some parts or figures unfinished. The effect is surprisingly, having refinement, sensuality and inner power. Contemplating life, he feels Azerbaijani as well as Belarusian, since so much of his learning has taken place here.  He dreams of painting a picture about the East and the West: the contemplative and the pragmatic. Through his work, Kamil dreams of constructing a new Tower of Babel.

Mr. Kamal’s works are kept at the Belarusians National Art Museum, the Belarusian Union of Artists, the Culture Ministry and many embassies accredited in Minsk; his works are also owned by private collectors in Austria, Azerbaijan, the UK, Germany, Holland, Israel, Italy, China, Russia, the USA and France.

From responses to the exhibition

“The exhibition is remarkable! We discovered a new world through the eyes of artist Kamil Kamal. His perceptions are consonant with our perception of life.” Yekaterina and Larisa.

“Kamal, your creativity is recognizable. You are integrated, self-sufficient personality in art.  Indefatigable energy, lust for life and purposefulness allow you to be in good creative form. We wish you to go on and to please us with your works!” Yours faithfully, Nudnov V.M. December, 1st, 2014

“Dear Kamal! I congratulate you on such a remarkable exhibition, it is really impressive. You have kept own style and outlook of the artist.” Tatiana Malysheva, artist December, 15th, 2014