The project of the Union State becomes the basis of a memorial in honour of the heroes of the First World War.

810 days which changed the world

The project of the Union State becomes the basis of a memorial in honour of the heroes of the First World War. 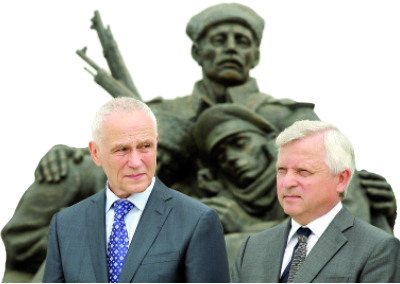 The history of the Union State of Belarus and Russia officially totals less than twenty years. But actually, the union of these two fraternal peoples is based on a centuries-old history when, more than once, it was necessary to repel aggression from the outside. The events during days of the First World War developed in such a way, the 100th anniversary of which was widely commemorated on August 1st, 2014 in Belarus and Russia. The monument in memory of the heroes and victims of those old battles was solemnly opened on Poklonnaya Hill in Moscow. Memorial activities also were held in Minsk. But the central event took place in a small regional centre, Smorgon, which is located at a distance of over one hundred kilometres from the Belarusian capital. Heads of the Belarusian Government, ministries and department and the Standing Committee of the Union State, headed by the State Secretary, Grigory Rapota, representatives of youth and veteran public organisations, thousands of people were present at the event.

Why here? The point is that in the territory of the Grodno Region (at that time it was the province) located in the northwest of Belarus, the Russian army managed to stop the equipping of German and Austrian troops with the newest weapons. At that time, the troops already occupied the most part of Poland, the city of Vilnius, Grodno and Brest. The war became a terrible tragedy for inhabitants of the region and its population was reduced almost by a third. Till now it reminds of itself by dozens of Russian and German/Austrian military burial places, nameless and common graves where hundreds of thousands of the fallen are buried alongside concrete pillboxes and other defensive constructions. The economy fell into disrepair. In total, 800,000 Belarusians were called into the Russian Army. 130,000 of them died. 50,000 civilians were violently taken as prisoners to Germany. Many hundreds of thousands also went into exile and were evacuated into the remote regions of the Russian Empire. Many of them did not return home.

The front line lay through the small provincial small town of Smorgon. Looking today at its cosy streets, the whitewashed walls of the Catholic and Orthodox Churches and the modern buildings sparkling with plate glass, it is difficult to believe that a hundred years ago, for 810 days and nights, a line of cruel opposition between the Russian and German/Austro-Hungarian armies passed through here. As a result, only ruins and a handful of people remained of the city’s population of 16,000 inhabitants. But the German plan to arrange here a ‘Russian Cannes’ — the grandiose defeat of the Russian empire — failed. On the contrary, Smorgon turned into the second Verdun for the Germans. Here, despite the huge number of victims, their offensive impulse completely ran out. An enormous number of victims, which became the main thing that led to the signing of the Russian-German armistice in 1917 in the village of Soly located near Smorgon, an armistice which became the prologue to the end of the war. As a result of the slaughter which occurred here, along with the mass bloodshed in thousands of similar mourning places, the German, Austro-Hungarian, Ottoman and Russian Empires disintegrated after several social revolutions. As a result, the world map changed beyond recognition.

However, citizens of the Union State have to learn about this anew. After all, for many decades the First World War was in the ideological shade of the Second World War — more well-known as the Great Patriotic War to the populations of the Post-Soviet States. Recently, people have started to openly discuss the necessity of restoring the historical truth, and among the first of those was the Standing Committee of the Union State.

It supported the initiative introduced by the Smorgon Region Executive Committee in 2006 to create a memorial complex on the 1915-1917 line. A competition of art projects was held and 9 collectives and separate authors took part. The winner became a collective with the participation of well-known Belarusian sculptors Anatoly Artimovich, Vladimir Terebun and architect Alexander Bozhiday. In October 2009, three sculptural compositions, a map of the line of the opposition of armies, a dome with a cross and a bell for a chapel and medallions with First World War markings were made from bronze according to their project and financed with funds allocated by the Standing Committee of the Union State, a powerful amount of around $750,000.

After several years, the construction of the memorial complex in honour of the victims and heroes of the First World War was started in Smorgon. The sculptural compositions, made by order of the Standing Committee of the Union State, will become its dominant feature and the memorial is conceived as a place of reconciliation, for the sake that humankind will, never again, have such wars. Its uniqueness lies in the fact that the memorial is erected on a 130 hectare area that is the actual place of real battles. While the project has not yet finished, all that has been so far, made an imperishable impression on the thousands of participants of the remembrance service which took place here on August, 1st, 2014 on the occasion of the 100th anniversary of the beginning of the First World War. The avenue of memory which will pass through the whole territory of the memorial park is already vivid. Sculptural compositions of Refugees, Soldiers of the First World War and Winged Genius of Soldier`s Glory are mounted on pedestals. Strains of Ave Maria, a guard of honour and the mournful words of people induced once again to reflect on tragedy of any armed conflict are also present. The Chairman of the organising committee on the carrying out of the actions dated to the 100th anniversary of the beginning of the war, the Deputy Prime Minister of Belarus, Anatoly Tozik, noted, “The memorial is created in honour of heroes and all the victims of the First World War. Hundreds of thousands of Russian, Belarusians and representatives of other nations which were part of the Russian Empire died here. We hope to complete the memorial by the 100th anniversary of the end of the war. It is logical, if it will be our general monument.”

The scale of the memorial is impressive. It is supposed that the museum of the First World War will appear in Smorgon and dozens of concrete German pillboxes, which even today show the line of opposition on suburban fields, will become exhibits of the museum.

The State Secretary of the Union State, Grigory Rapota was deeply touched and Grigory Alexeevich highly estimated the artistic qualities of the architectural complex before sharing his thoughts with journalists on the main point — how to avoid the repetition of the horrors which happened 100 years ago in Belarus. “The First World War became one of the most tragic events of the 20th century. It is very important to understand what started that war and for whom it was necessary? I adhere to that point of view that any war is senseless. But when it comes to your territory then, according to the historian, it turns into tragic necessity. It concerns also Russia. Here in Smorgon, during those 810 days, its best units deterred the enemies and did not let them go, despite the application of poison gases and other innovations unprecedented in military history at that time. The best forces of the Russian guards died here, but the German and Austro-Hungarian armies broke here too. It is necessary to understand the sources of that war, so that we do not repeat it in the future.”

That day, Smorgon held a military-dramatized representation which recreated one of the battles of that time and the unique exhibition — Belarus in the First World War — opened there. Hundreds of real exhibits were on display: weapons and objects of life, photos and documents. The Minister of Culture of Belarus, Boris Svetlov, explained that the exhibition will also be shown in Minsk and other cities. A number of other activities, planned together with the Standing Committee of the Union State, and devoted to the 100 anniversary of the First World War, will be held.