Pesnyary band sings ‘Reserve, place of crystal sunrise rays and the light rising above the land’: words devoted to a unique place which everyone should visit

Pesnyary band sings ‘Reserve, place of crystal sunrise rays and the light rising above the land’: words devoted to a unique place which everyone should visit 
1. ‘Majestic grandeur of many-year oaks…’ This is the largest and oldest forest in Europe — covering 500,000 square kilometres. Some of its trees are 300-400 years old and a true patriarch oak grows here — being 600 years old! With a cut-through hole, it continues to live in the Pushcha. Our ancestors believed that a person would be healed of any disease on passing through the hole, and many still hold the belief, making pilgrimages to the mighty tree. There are many other natural ‘tricks’ in the forest’: an oak and a birch grown into a single tree; and a birch with a gnarl in the form of an auroch head. ‘Children of aurochs do not wish to become extinct…’ The virgin wilderness is a happy hunting ground for dozens of animals and birds. Importantly, the largest European animal lives here: the auroch. Many excursions are offered to the Pushcha: on foot, by bicycle or by car. The two-day ‘Pushcha Robinsons’ tour envisages spending a night in the forest.


2. ‘Finding my way to the spring along an invisible path…’ Many centuries ago, Vladimir Monomakh used to hunt here and, in 1888, the Pushcha officially became property of the royal Romanovs, who began constructing their palace. During the Great Patriotic War, the latter was destroyed but the roads — laid so many years ago — are still operational; the cast-iron markers feature Imperial emblems. The local Viskuli Residence has been attended by all general secretaries and famous personalities but the site is known most for its hosting, on December 8th, 1991, of the heads of three Soviet republics: Belarus, Russia and Ukraine. It was in Viskuli that they signed the agreement to establish the Commonwealth. In doing so, Stanislav Shushkevich, Boris Yeltsin and Leonid Kravchuk sentenced the great Soviet Union to death. Escape city bustle in the ‘Pushchanka’


3. −‘Warm your heart by tall birches…’ Guests of the local Museum of Folk Life can try a nip of the local alcoholic beverage: famous ‘Pushchanka’, once appreciated by Russian tsars. On coming to the Pushcha, tourists can settle into their hotel, guest-house or agro-mansion, enjoying a range of facilities: a tennis court, gym, billiards, sauna, swimming pool and sports pitch. Local restaurants offer dishes cooked from freshly caught fish and wild fowl, or other Belovezhskaya Pushcha ingredients.


4. ‘Where the grass is tall and bushes are thick…’ Belarusian Father Frost’s Residence occupies almost 15 hectares and is one of the most beautiful sites globally in which you may visit Father Frost. He welcomes guests all year round but, in summer, appears with a straw hat rather than his usual winter fur cap. Every year, around 150,000 children and adults visit him; he is a treat to behold, regardless of whether you are 8 or 80. Look at Belarus from the White Tower


5. ‘On hearing the voice of our forefathers…’ The fortified 13th century Belaya Vezha (White Tower) is situated in the district centre of Kamenets. It resembles a large chess rook and was long believed to have given the Belovezhskaya Pushcha its name. However, this is not true: the tower was only painted white in Soviet times (being plain brick until then). Now, it has been repainted white. direct express bus connects the village of Kamenyuki (where the National Park’s administration is situated) and Brest. 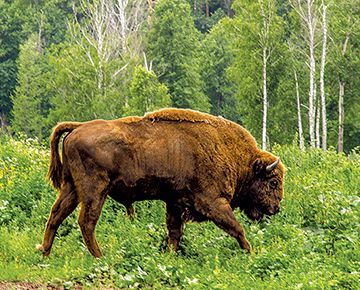